The past year saw yet another record-breaking performance for total HREMC issuance, which totaled $9.86 billion in 2016, surpassing the previous record of $9.51 billion in 2015, according to the latest market commentary from New View Advisors.

Nomura remained the top issuer with $5.4 billion, which represents approximately 54% of the company’s life-to-date issuance of $10.1 billion, according to New View Advisors, which compiled the issuer rankings from publicly available Ginnie Mae data.

Bank of America Merrill Lynch ranked second with $3.2 billion of issuance. Life-to-date, the company has issued $17.8 billion of all HREMICs, for a 40% market share. Meanwhile, Nomura has issued 23% of all HREMCs, and Barclays has issued 13%. 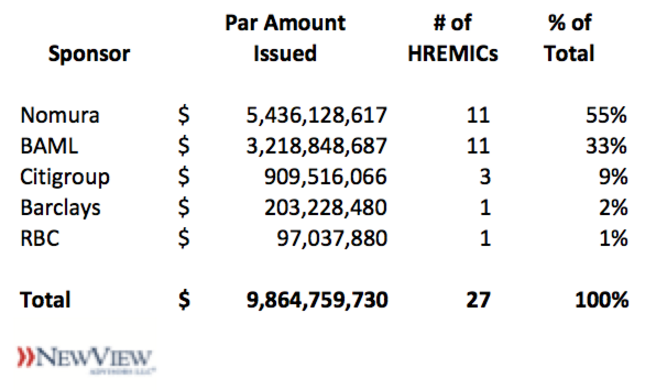 Approximately 80% of outstanding Home Equity Conversion Mortgage-backed securities (HMBS) have been resecuritized into HREMICs, up from 77% at the end of the third quarter of 2016.

“A stronger bid for the Interest-Only HREMIC classes emerged in 2015, and the seasoned HMBS pools we’ve referenced in past blogs are also contributing to the HREMIC volume uptick,” states New Views Advisors. “The HREMIC structure, which allows issuers to create bond classes such as these ‘IO’ securities, is increasingly the most profitable option.”

HREMIC collateral consists of Ginnie Mae guaranteed HMBS, which are backed by pools of participations of HECMs that are insured by the Federal Housing Administration.

“This double layer of government guarantee, combined with the relatively high coupon and favorable prepayment patterns of the underlying loans, results in very favorable execution, even when compared to other Ginnie Mae ‘forward mortgage’ securities,” states New View Advisors.