Through the first nine months of 2016, HREMIC issuance was nearly $7.7 billion, exceeding last year’s volume—a previous record—of $6.5 billion during this same period, according to the latest market commentary from New View Advisors.

With three-quarters of the year already in the books, the industry remains on pace to set its second consecutive annual HREMIC issuance record, says New View Advisors, which compiles is commentary analysis from publicly available Ginnie Mae data, as well as private data sources.

Of these sponsors, Nomura remains the top issuer, with $4.5 billion, which New View Advisors notes is almost half of the company’s life-to-date issuance of $9.2 billion. With a total of nine HREMICs, Nomura commands a 59% market share.

Meanwhile, this was the first HREMIC transaction for Citigroup, bringing the number of current issuers back to five for the first time since 2014, according to New View Advisors’ analysis. 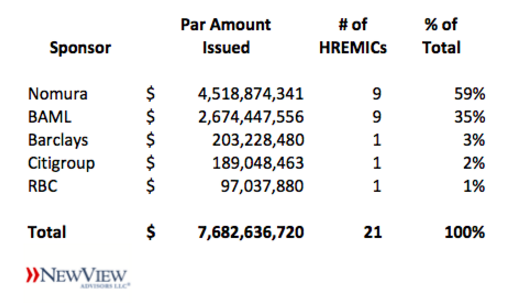 “This double layer of government guarantee, combined with the relatively high coupon and favorable prepayment patterns of the underlying loans, results in very favorable execution, even when compared to other Ginnie Mae ‘forward mortgage’ securities,” writes New View Advisors in its commentary.

Approximately 77% of outstanding HMBS securities have been resecuritized into HREMICs, up from 73% at the end of the second quarter of 2016.

“A stronger bid for the Interest-Only HREMIC classes emerged last year, and the seasoned HMBS pools we’ve referenced in past blogs are also contributing to the HREMIC volume uptick,” writes New View Advisors. “The HREMIC structure, which allows issuers to create bond classes such as these ‘IO’ securities, is increasingly the most profitable option.”

In a new EBRI research brief, older Americans report optimism about retirement and steadiness regarding spending before and after COVID-19.

Ellington Financial described in Q2 earnings that market challenges have hit its reverse mortgage investment, but reasons for optimism exist.