The Department of Housing and Urban Development (HUD) has imposed a series of program changes for Home Equity Conversion Mortgages (HECMs) over the last few years. With new proposals already on the docket for 2016, few studies have shown the impacts of how such policy changes impact reverse mortgages—until now.

A recent research brief published by the Center for Retirement Research at Boston College summarizes the results of a recent study that estimates the effects of HECM program changes—specifically, the Financial Assessment and initial draw limitations—on both defaults and take-up of reverse mortgages.

Reverse mortgage default rates peaked in the aftermath of the financial crisis at 10% in 2013. This rise in defaults within the HECM portfolio, coupled with a negative balance in HUD’s Mutual Mortgage Insurance fund, prompted the agency to establish major changes to the HECM program.

The resulting modifications established a restriction on the amount of loan proceeds borrowers could receive in a lump sum during the first year of the HECM to 60% of the initial principal limit. HUD implemented this change in fall of 2013, less than two years before implementing more rigid underwriting standards with the implementation of the Financial Assessment in April 2015.

While the general impact of these policy changes is clear, that is, their intent should help curb the default rate by screening high-risk loan applicants and help borrowers avoid financial trouble, researchers say the magnitude of how these program changes will impact take-up of reverse mortgages remains unclear.

In their analysis, researchers relied on data from ClearPoint Credit Counseling, which provided information on households that received reverse mortgage counseling during 2006-2011. The data, which included demographic characteristics, FICO credit scores and other indicators of household financial wealth, was linked to HECM loan data from HUD, which provided details on reverse mortgage originations, withdrawals, loan terminations and defaults.

The purpose of linking the two datasets allowed researchers to analyze borrowers who ended up in default based on their financial characteristics at the time of loan origination. Of the study sample size comprising 27,894 households, 58% had a reverse mortgage.

When analyzing the linked datasets, researchers found a correlation between certain HUD reverse mortgage policy changes and their impact on reverse mortgage uptake and the probability of default. 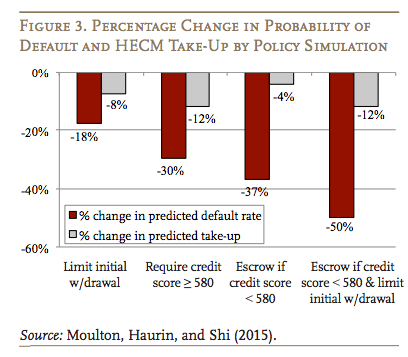 In the first simulation, researchers imposed the upfront withdrawal limits on all households in the sample who had reverse mortgages.

As higher withdrawal percentages are associated with higher rates of default, researchers found that imposing this restriction resulted in an 18% drop in the probability of ever defaulting. However, because a withdrawal limit may make reverse mortgage less attractive to some prospective borrowers, imposing this restriction reduced HECM take-up by 8%.

Researchers then examined a second simulation—one that does not include the withdrawal limit, but assesses the impact of using a specific underwriting threshold—using a credit score of 580 for determining whether an applicant should be approved for the reverse mortgage.

Requiring a credit score threshold of 580 allowed researchers to eliminate households that would not qualify for a reverse mortgage under this scenario. As a result, this simulation produced a 30% drop in the probability of defaulting and reduced uptake by 12%.

A third simulation, like the second one, excluded the withdrawal limit and included a credit score threshold of 580 for screening applicants’ finances. Unique to this simulation is that instead of rejecting loan applicants who fall below the credit threshold, this scenario allows them to take a reverse mortgage only if they have sufficient funds to set aside to cover future property taxes and insurance.

Compared to the other simulations, this scenario achieved a much larger drop in the default rate (37%) and a smaller drop (4%) in reverse mortgage uptake.

Lastly, the fourth simulation combined the policy changes from the first and third simulations, including HUD’s initial withdraw limit and the set-aside account for borrowers below the 580 credit score threshold. This simulation showed the largest drop in the default rate—a full 50%—and a 12% drop in take-up.

While there are lingering concerns that stricter underwriting requirements and withdrawal restrictions could ultimately make reverse mortgages less appealing to prospective borrowers, researchers expect the impact of credit-based underwriting will be small, “particularly when such standards are accompanied by a required set-aside for tax and insurance payments rather than a hard cut-off.”

“The combined impact of both types of policies could reduce take-up by 12%—primarily due to the restrictions on the initial withdrawal,” the researchers state. “However, this impact on take-up is relatively small for a rather large reduction in estimated defaults.”

A new survey from American Advisors Group (AAG) reveals the statistic regarding the financial stability of both Baby Boomers and their Gen X children.

The leading reverse mortgage lender, AAG had instituted a previous round of layoffs in June.