That works out to about $15,000 per homeowner, according to the most recent home equity report from real estate analysis firm CoreLogic. But as has been the case for some time now, the biggest gains came from the western states: California homeowners saw average gains of $44,000 year over year, while their counterparts in Washington State enjoyed an increase of $40,000.

“There are wide disparities in home-equity gains by geographic area, with higher-priced, capacity-constrained markets along the east and west coasts registering the largest increases,” CoreLogic president and CEO Frank Martell said in a statement announcing the results.

Still, appreciation along the Eastern seaboard lagged far behind the West: Massachusetts homeowners saw average gains of $23,000 in 2017, followed by Rhode Island at $20,000. No other Eastern state topped the $20,000 mark, while Nevada, Utah, Idaho, and Colorado all registered higher per-household gains. 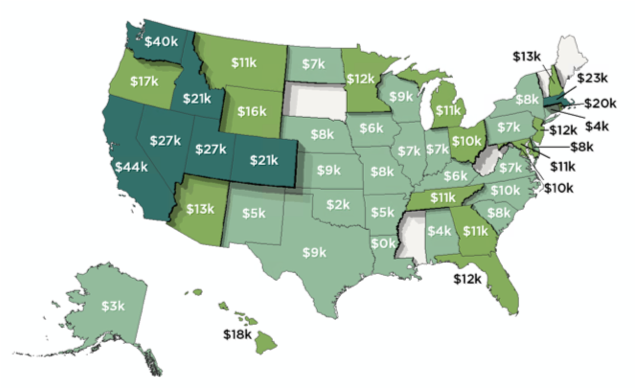 “In contrast, the average owner in Louisiana had little change in their housing wealth during 2017, given much lower prices and modest price growth,” Martell said.

Louisiana was the only state to remain flat, but multiple other states in the South and Midwest registered far more modest gains: Oklahoma homeowners, for instance, saw increases of $2,000.

The report also found continuing positive trends in the proportion of “underwater” homes, which stood at 6.3% of all mortgaged properties, a year-over-year decline of 21%.

That’s also a significant drop from the worst days of the recession, when 26% of all mortgaged residential properties had mortgages that were worth more than the home itself.

Alex covers the skilled nursing industry for Aging Media Network, with a particular focus on the intersection of finance and policy. Outside of work, he reads nonfiction, experiments in the kitchen, enjoys pretty much any type of whiskey or scotch, and yells at Mets games from his couch — often all at once.