A major forward-mortgage consulting firm recently took a deep look into the potential diversification through reverse products — and ended up wondering what top players are waiting for.

Much like Home Equity Conversion Mortgage originators, forward players are struggling, according to the report from the Greenwood Village, Colo.-based STRATMOR Group: With fixed interest rates on the rise, and the Mortgage Bankers Association predicting average rates of 5.6% by 2020, many players anticipate declines in demand for refinances.

“As is typical in a down market, traditional forward lenders are looking for opportunities to improve profitability and gain market share,” Jim Cameron, senior partner at the consulting firm, observed in a new report. “This may include expanding into new channels such as consumer direct, or into new products such as non-QM, construction, renovation, and last but not least, reverse mortgages.”

STRATMOR’s key pitch to forward lenders hinges on favorable demographic shifts on the horizon and the general underutilization of HECMs among the general population. In addition, the firm postulates, big banks’ departure from the business has left a void for independent mortgage firms — while major lenders such as Wells Fargo and Bank of America are unlikely to return. 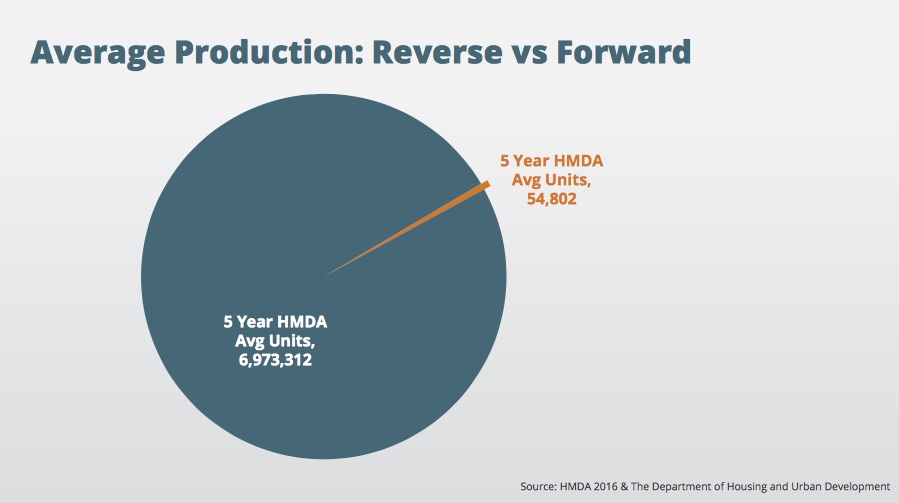 Cameron used a “bottom-up” approach to approximate the amount of borrowers aged 62 and older who may have been able to use a HECM for their home-equity-loan needs but for some reason didn’t. Of the 250,000 people who completed a mortgage-satisfaction survey from STRATMOR, 45,000 were over the age of 62 — and of that group, 87% had loans secured by a primary residence, according to Cameron.

Drilling further down, 51% of those loans involved a purchase, prompting Cameron to ask how many of them could have considered a HECM for Purchase transaction instead.

In the report, Cameron expanded upon the results of a survey about lenders’ top reasons for avoiding the reverse mortgage; he first introduced the data at ReverseVision’s annual UserCon in San Diego earlier this month.

Concerns about reputation risk, a lack of in-house expertise, and the “distracting” effect HECMs might have from the forward business topped he list of potential hangups. But Cameron compared those worries to people who still use cassettes to listen to music, encouraging lenders to “toss that old cassette tape deck.”

For instance, Cameron pointed to Financial Assessment, life expectancy set-asides, and other recently introduced protections as counterpoints to the reputation-risk concern, while the so-called “distracting” effect of offering HECMs could present a key opportunity in a world of rapidly deteriorating forward margins.

“To lenders who are thinking about going into reverse, here’s the good news: Reverse is a mortgage product that can benefit senior borrowers,” he writes in conclusion. “Concerns of the past are being mitigated through regulation and improved practices. Compelling demographics will continue to create opportunities for lenders that can execute well in the go-forward market.”

Alex covers the skilled nursing industry for Aging Media Network, with a particular focus on the intersection of finance and policy. Outside of work, he reads nonfiction, experiments in the kitchen, enjoys pretty much any type of whiskey or scotch, and yells at Mets games from his couch — often all at once.