Mortgage-related concerns continue to account for the largest slice of Consumer Financial Protection Bureau complaints filed by older Americans according to a new report — and a few expected states represented the lion’s share of the total.

Since the CFPB began collecting complaints in 2011, California leads the nation with 14,933 submissions about financial products from respondents who self-identified as 62 or older, followed by Florida with 11,673 and New York with 6,098. On the other end of the spectrum, North Dakota — which ranked 49th by total population as of the last U.S. Census in 2010 — brought up the rear with just 59 submissions from older consumers.

It’s also important to note that the Golden State’s perch atop the list likely has something to do with its population: With 37 million residents as of 2010, the most populous U.S. state has about 10 million more people than second-place Texas, and a greater population than the nations of Canada and Australia. 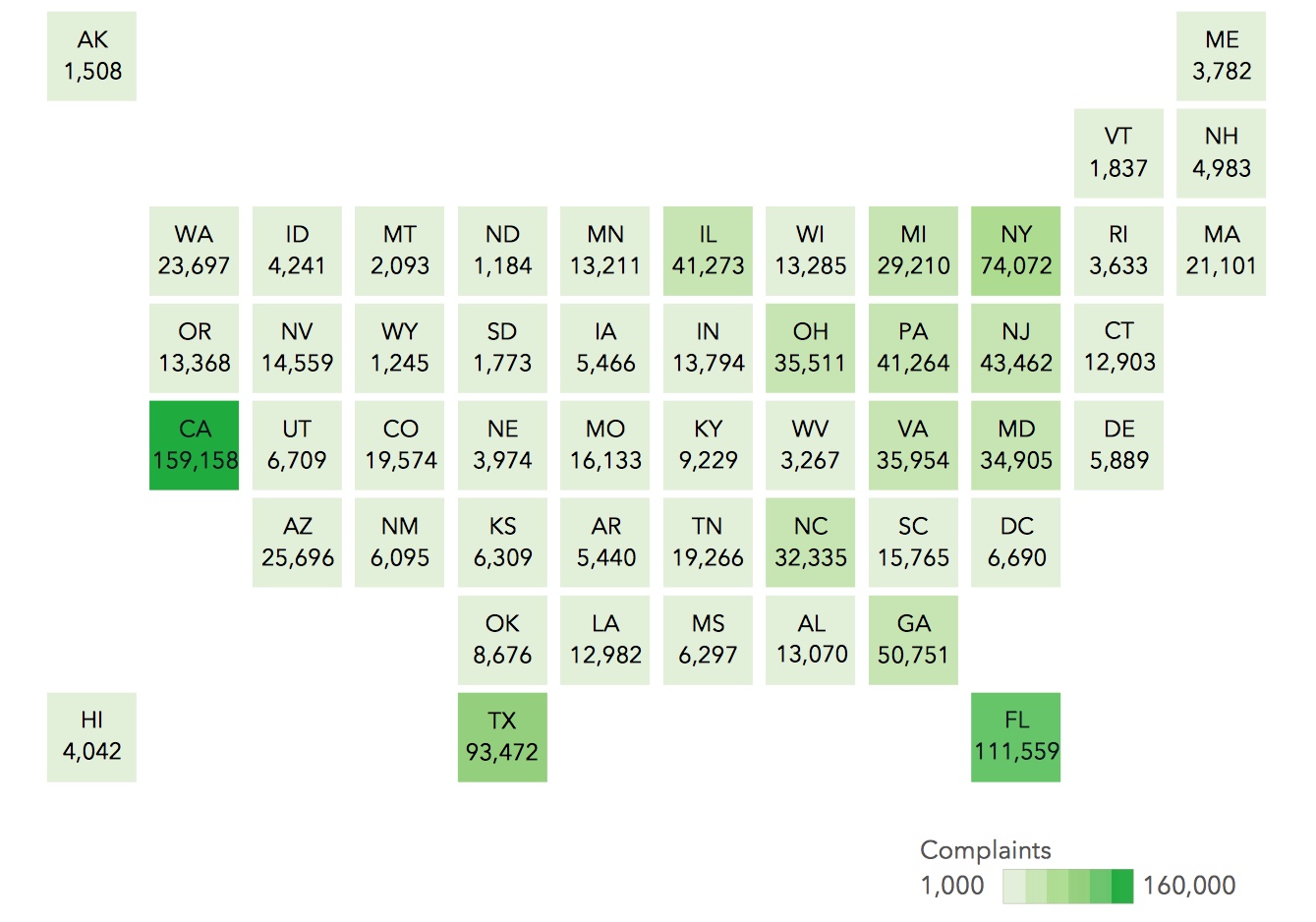 The bureau tallied a little more than 103,000 total complaints from folks aged 62 and older, with mortgage issues accounting for about 26% of the total — compared to just 16% of complaints from people of all ages. Of those more than 26,000 mortgage-related complaints from older Americans, the top issue stemmed from the respondents’ inability to make mortgage payments.

Just last month, the CFPB took a deeper dive into reverse mortgage-related complaints and found that payment problems also topped the list with 39%, followed by issues with the receipt of timely payments from lenders and confusion over loan applications. The bureau, which was created as part of the Dodd-Frank financial reform package in 2010, also mentioned complaints about the transition process following the death of a borrower.

“Servicers were slow to acknowledge their requests and occasionally required the same documentation to be submitted multiple times,” that report noted of some non-borrowing spouses. “Sometimes these delays resulted in foreclosures being initiated.”

As RMD has covered in recent months, President Trump and the Republican majorities in Congress have made significant moves to curtail the CFPB’s power, claiming that the bureau stifles growth through over-regulation. Critics have also frequently railed against the consumer complaint database, arguing that by publishing information about individual issues before they can be investigated and resolved, the CFPB essentially puts a government imprimatur on unverified claims.

Under the House plan to roll back Dodd-Frank reforms, the CFPB would no longer operate a public database. But Richard Cordray, the CFPB’s embattled director, defended the database in the preface to his agency’s most recent report.

“By sharing complaint data publicly, we empower consumers with information they can use to make decisions and give public officials insight into issues affecting our communities,” Cordray wrote. “Likewise, the industry can see direct feedback from customers and review complaints made about others in the same markets. This helps them fix current problems, keep small problems from growing, and prevent future problems.”

Freddie Mac: Majority of adults are likely to age in place, survey finds

New research from Freddie Mac suggests that not only do more seniors want to age in place, but they’re now better equipped to do so.

FHA staff gathered at a recent reverse mortgage industry event to share a commitment to HECM, and common issues they see in the endorsement process.