Reverse mortgage endorsements dropped slightly towards the end of 2016, dragged down by a modest decline in retail origination volumes. Some lenders, however, bucked the trend in a big way with sizable gains in their retail channels. 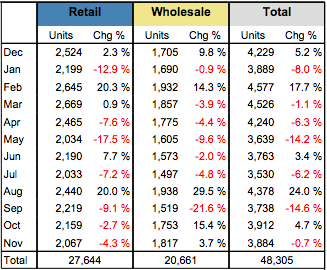 Despite the broader industry decline, November was a big retail month for several lenders, including All Reverse Mortgage, which jumped 358.3% with 55 loans during the month, according to RMI data. Year-to-date, the company’s volume was up 8.7% with 263 loans through November.

M&T Bank also reported substantial retail growth in November, growing 282% to 42 loans; while Advisors Mortgage Group posted a 104% increase to 57 loans to take the #11 ranking on the month, according to RMI.

Over the 12 months trailing November 2016, Synergy One Lending continued to lead the way among lenders with the most retail and wholesale units added during this period, which saw the company adding 911 retail and 542 wholesale loans.

On the wholesale side, Longbridge Financial added the second-most units in this area behind Synergy One Lending with 542 loans, followed by FirstBank with 186 loans, The Money Source Inc. with 131 units and Reverse Mortgage Funding with 58 wholesale loans added over the 12 months trailing November 2016.

See where other lenders ranked through November 2016, including their retail and wholesale channel splits, by clicking here.