U.S. homeowners age 62 and older saw a $152 billion increase in home equity during the third quarter of 2016, bringing the aggregate value of equity held by these homeowners to $6.1 trillion, according to new data from the National Reverse Mortgage Lenders Association (NRMLA).

The increase realized during the third quarter was driven largely by a 2.3% growth in senior home values, which helped push the NRMLA/RiskSpan Reverse Mortgage Market Index (RMMI) up to 217.34—an all-time high since the quarterly index was first published in 2000.

“The upward trajectory of the RMMI tells us that housing wealth continues to provide senior homeowners with a financial resource they can use to support their needs during their retirement years when income is dependent on Social Security, investment assets, and pensions,” said Peter Bell, NRMLA president and CEO, in a press release. 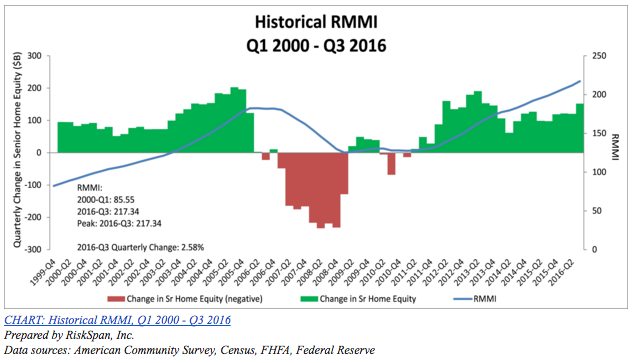 Rising senior home equity arrives during a time when recent studies and policy commissions this year have highlighted the use of reverse mortgages as a possible retirement solution for aging Americans, many of whom are approaching retirement age with higher debt and less resources for saving.

Only 29% of households aged 50-64 will leave the workforce with a traditional pension, compared to 49% of today’s age 65 and older households, according to findings published last week by the Joint Center for Housing Studies at Harvard University.

Additionally, 60% of pre-retires aged 61-61 have at least one source of long-term debt, and 26% have multiple sources of debt, according to a study from the George Washington University School of Business cited by Harvard researchers.

This combination of constraints raises “serious concerns” about the financial stability of future retirees and their ability to manage the costs of aging, including paying for long-term care, NRMLA states.

But increases in senior home equity, which continues to grow at a multi-billion-dollar clip, is encouraging, especially when considering the potential for tapping into this selling amount of housing wealth for retirement.

“The positive trend is also reassuring for homeowners nearing retirement age who are less likely than their predecessors to leave the workplace with a defined benefit plan and also more likely to have long-term debt,” Bell said.