With three quarters of 2016 now in the books, issuance of Home Equity Conversion Mortgage-backed securities (HMBS) totaled more than $6.9 billion year-to-date through September, and the rankings are in for the top HMBS issuer on the year thus far, according to the latest commentary from New View Advisors.

HMBS issuance volume totaled $6.922 billion for the first nine months of 2016, up $179 million from the its year-ago volume of $6.743 billion through the third quarter of 2015, says New View Advisors, which compiled its commentary using publicly available Ginnie Mae data as well as private sources.

Through September year-to-date (YTD), Reverse Mortgage Funding ranks as the top HMBS issuer with $1.519 billion of securities across 96 total pools. The company, which first issued HMBS in the first quarter of 2014, now commands 21.95% of the market share for HMBS issuance, surpassing American Advisors Group (AAG) by just $12 million.

AAG clocks in at the second spot with HMBS volume of approximately $1.507 billion across 143 total loan pools, for a market share of 21.78%. Until now, AAG had previously been the leading HMBS issuer since the second quarter of 2015.

Finance of America Reverse claimed the third-ranked spot with HMBS of roughly $1.086 billion through the first three quarters of the year. During this time, FAR issued 150 total loan pools and currently commands a market share of 15.69% of the total HMBS market. 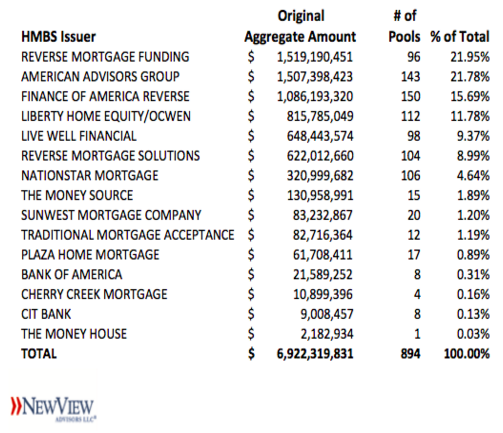 As reported earlier this month, original HMBS issuance grew 34% in September, a month that was fueled by a record number of 119 loan pools that were issued.