It’s no secret that the U.S. faces a swelling aging population today and will continue to do so in the future. But as the nation’s elderly population ages at a rapid clip, many seniors across the country will be at risk of not having the economic wherewithal to independently age in place, according to a recent report.

National averages suggest that 53% of U.S. older adults living alone, and 26% of older adults living in elder couple households (with an older spouse, partner, or some other adult), lack the financial resources required to pay for basic needs, according to the “Economic Insecurity and Older Americans Insecurity in the States 2016” report released last month.

Additionally, in every state, more than four out of 10 single seniors are at risk of being unable to afford basic needs and age in their own homes. 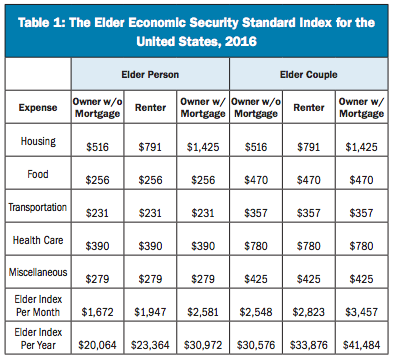 The Elder Economic Security Standard Index measures the costs faced by households that include one or two older adults age 65 and older living independently.

Developed by the Gerontology Institute at the University of Massachusetts Boston and Wider Opportunities for Women, and maintained through a partnership with the National Council on Aging (NCOA), the Elder Index defines economic security as “the income level at which elders are able to cover basic and necessary living expenses and age in their homes, without relying on benefit programs, loans or gifts.”

For older adults living in their own homes and don’t carry a mortgage, the Elder Index is $20,064 annually for a single senior living alone, and $30,576 for a couple. That’s for elderly couples who own their homes.

At the local level, the costs of living vary from state to state, across all elder single and couple parameters. For singles living alone, the cost of living independently ranges from a low of $20,688 in Oklahoma to $30,156 in Hawaii—where the cost of living for couples is the highest at $41,244, and the lowest in Nevada at $31,344.

But when it comes to gauging elder economic security, states in the American Northeast and South comprise the majority of the 10 states with the largest Elder Economic Insecurity Rates (EEIRs) for single seniors. 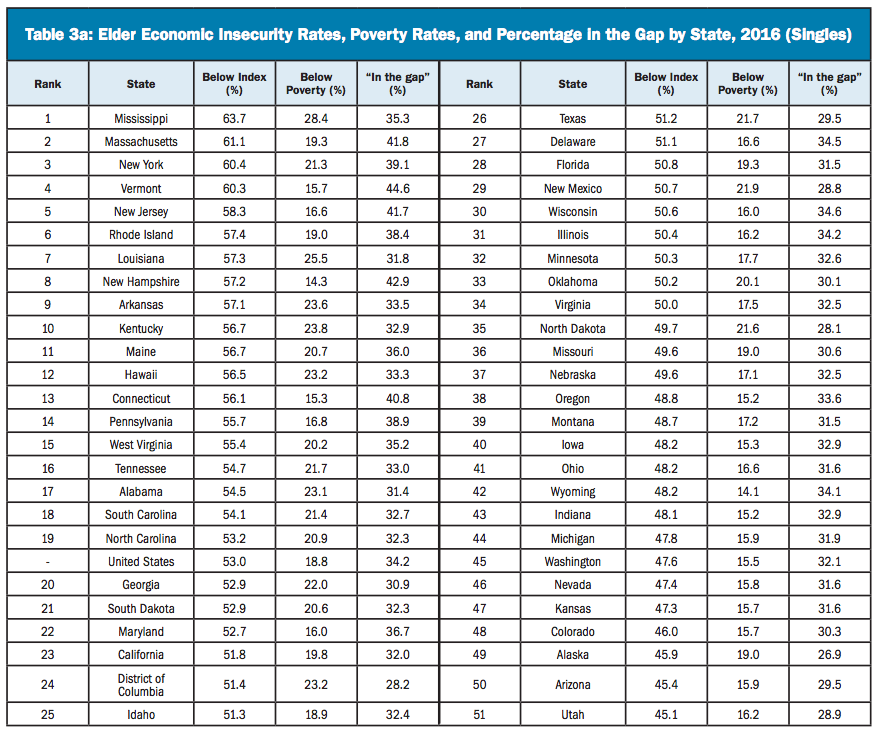 With an EEIR of 63.7%, Mississippi tops the list. This means that single elders living in the state are more likely to face economic insecurity than are single elders in any other state. Among, single seniors in this state, approximately 28% are living below the poverty line.

“The EEIR for singles is lowest in Utah (45%), with fewer than half of single elders living in insecurity,” the report states. “This rate is eight percentage points lower than the national average.”

As for senior couples, once again Northeastern and Southern states dominate the rankings with the largest EEIR. Seniors living in two-person households in Mississippi (34%) and Vermont (32%) are more likely to face economic insecurity than elder couples living in other states.

While the insecurity rate for Mississippi is eight percentage points higher than the national average of 26%, the EEIR for couple households is the lowest in the District of Columbia, with just 15% of senior couples living with economic insecurity. 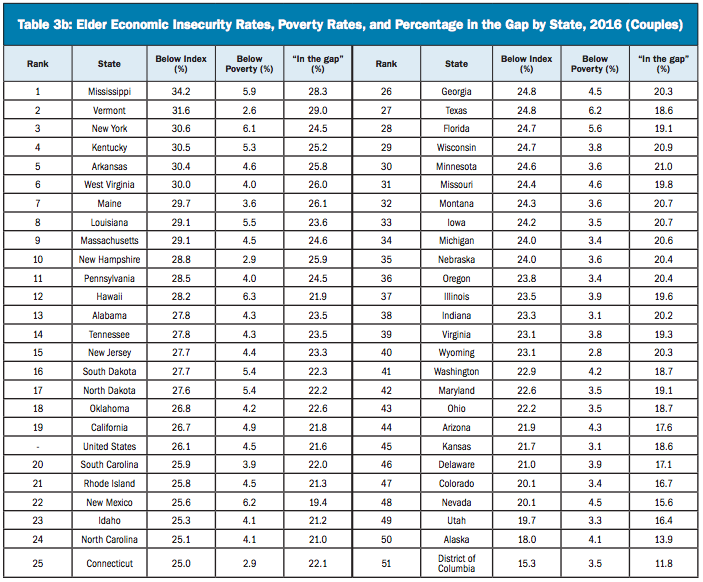 The authors of the report also go into further detail to determine which shares of senior households across each state, and the District of Columbia fall below the poverty line, as well as the share of seniors living “in the gap” with incomes falling between the federal poverty level and the Elder Index.

These “in the gap” households, according to the authors, have incomes that are too high to qualify for many means-tested public benefit programs, yet too low to achieve intermediate- or long-term economic stability.

On average, the share of older adults living alone with incomes below the poverty line is 18.8% throughout the U.S., while another 34.2% live above the poverty level yet still have income that is less than what is required to live with economic security.

In every state, the share residing “in the gap” between the poverty level and Elder Index is larger than the share living in poverty. In some states, like Vermont, the share of households living in the gap is nearly three times higher. 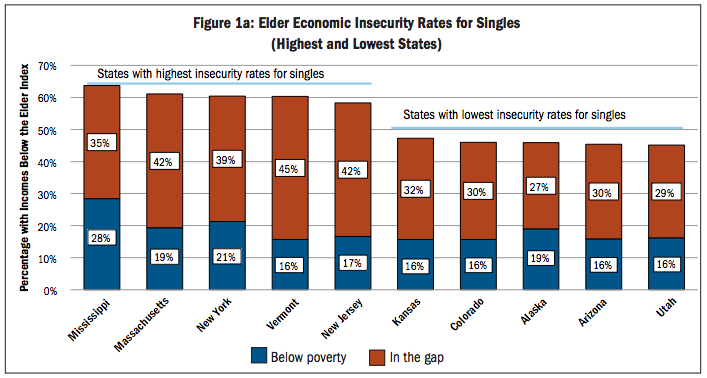 Both the poverty rates and EEIR values are substantially lower for couples than for single households across the U.S., which researchers attribute to economies of scale in costs of living, but also because two-person households typically have higher levels and more sources of income.

This becomes evident when looking at Vermont, where just 2.6% of its elder couples are living below poverty, compared to 16% of single couples who are living below the federal poverty level in the state. On the other hand, Hawaii had the highest rate of elder couples in poverty at 6.3%, which is higher than the national average of 4.5%.

But although just 2.6% of Vermont elder couples live below poverty, an additional 29% have incomes above the federal poverty level, but below what is required to live with economic security.

“These figures make clear that while a large majority of couples avoid poverty, many are unable to afford daily expenses of living as reflected by the Elder Index,” the researchers state. 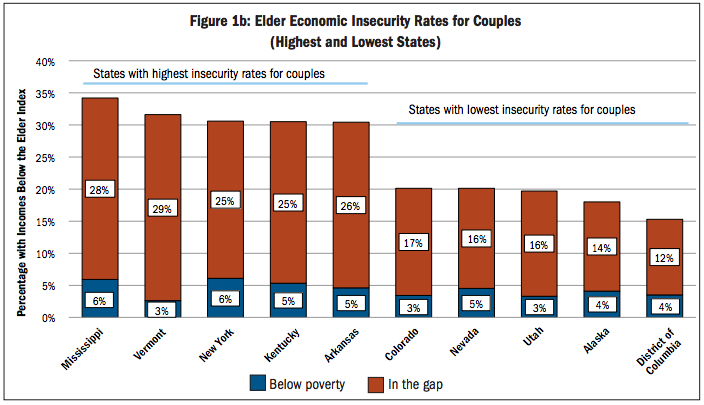 For lower income households, Social Security has a greater significance. Elder Index researchers found that, on average, half of older adults who live below the Index rely on Social Security for at least 90% of their incomes.

“Many older adults who live alone do not have the means to live with economic security,” the researchers state. “These older adults are of special concern, and policy and programs that address the concerns of single or couple elders living on their own—congregate and home-delivered meals, transportation, falls prevention, employment and training—should also be of special concern to federal, state and local governments.”

Ultimately, the Elder Economic Insecurity Rates demonstrate that a large share of every state’s independent seniors lack incomes that would allow them to not only escape the threat of poverty, but prevents them from aging in their own homes.

“Helping all older adults reach economic security is the goal to which elders and those who represent and serve them should aspire,” researchers conclude. “Protecting Social Security benefits is essential for older adults, including not only those who are poor but also for those ‘in the gap,’ more than half of whom rely on those benefits for a large majority of their incomes.”

Reverse Mortgages Grow by 5 Times in Australia Since 2019