The gap continues to widen between reverse mortgage volume in 2016 compared to recent years as Home Equity Conversion Mortgage (HECM) endorsements sunk to their lowest single-monthly total this summer. Despite the broader industry declines, certain major metro markets continued to buck the trend of falling volume with some notable growth, according to recent industry data.

Through July 2016, HECM endorsements of 28,164 total units year-to-date (YTD) represent a decrease of 15.6% compared to the same period in 2015, when the industry produced 33,368 loans, as evidenced by the latest data report from Reverse Market Insight.

The decline can be attributed, in part, to July 2016 being the single lowest month for endorsement volume in 2016, with just 3,534 loans. Declines among most of the top-10 states for volume can also be pegged for the widespread dip in endorsements. 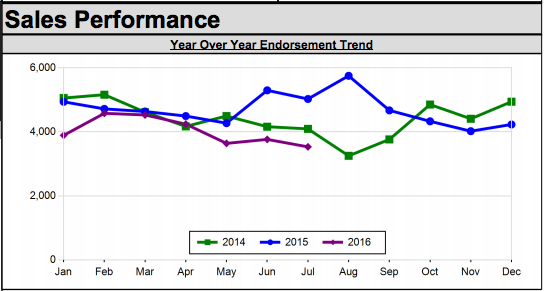 Only four states report YTD volume growth in 2016 compared to last year, with California leading the way with 6,319 total loans, an increase of 2% over 2015.

The Golden State continued to reign supreme among all other states as it was propelled by sizable growth in three top-10 cities, including Los Angeles, where endorsements (464) rose 42.8% year-over-year; San Diego, whose 271 units puts the city’s volume 27.2% higher than what it was last year during this time; and Riverside, which reported 131 loans YTD for an increase of 87.1% over 2015.

Continuing its growth story, Colorado remained a hotspot for reverse mortgage volume through July 2016 with 1,038 loans, representing a year-over-year increase of 25.7%.

The state was driven by the performance of its largest city, Denver, which reported 229 units through July 2016, a growth of 51.7% compared to last year, pushing the Mile High City to the third ranked spot overall among cities.

In keeping with the trend out west, Washington also posted year-over-year gains in endorsement volume. The state, which ranked seventh overall YTD through July, reported 796 loans, an increase of 13.6% from last year.

See where other states, cities and zip codes are producing the most HECM volume here.

Reverse mortgage industry performance appears even stronger when comparing the first quarters of 2021 and 2022, respectively, though refis remain elevated.

Longbridge appoints Packer as COO as part of expansion

Longbridge Financial announced the appointment of Bill Packer to serve as COO, with an aim to expand the lender’s front- and back-end technology.