Often considered a byproduct of the housing market crash, the growing number of older households carrying housing-related debt into their retirement years doesn’t appear to be a short lived phenomenon, according to a new analysis on seniors’ housing impact and retirement security.

The collapse of the housing bubble impacted millions of American homeowners nationwide. But for older homeowners, the unintended effects of the market crash are more long-term.

One clear trend that has emerged is the share of older households carrying mortgage-related debt into retirement continues to increase, as well as the amount of this debt, according to a recent brief from the Center for Retirement Research at Boston College.

“Combined with lower house prices after the bubble burst, these trends significantly reduced net housing wealth and undermined retirement preparedness and financial flexibility for a substantial share of households in 2013,” writes the research team led by Alicia H. Munnell, director of the Center for Retirement Research at Boston College and

Home prices have fluctuated since 2000, reaching new peaks during the housing bubble, crashing once the bubble burst, and then gradually making their recovery back to their long-term trend level.

But unlike home prices, trends in housing debt have been more volatile, with debt like mortgages, home equity loans and home equity lines of credit increasing consistently over the years for older households in particular.

For households ages 55 and older, the share with housing debt rose by 8 percentage points between 2001-2013, according to calculations from the 2013 Federal Reserve Survey of Consumer Finances (SCF), which is conducted every three years, with 2013 being the most recent release. Meanwhile, the debt burden—defined as the median ratio of housing debt to household income—grew by more than 50 percentage points for this age group. 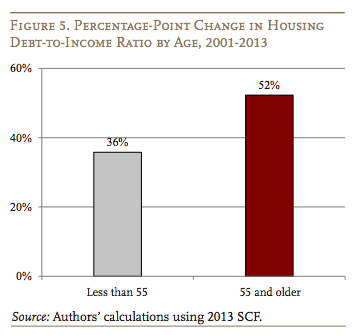 Previous work from the Center for Retirement Research has shown that even if households work to age 65 and annuitize all their financial assets, including home equity, more than half are still at risk of not being able to maintain their standards of living in retirement.

In 2013, the National Retirement Risk Index (NRRI), which is based on the Fed’s Survey of Consumer Finances, showed 52% of today’s working-age households were at risk of being unable to maintain their pre-retirement consumption levels once they stopped working.

Considering that home prices have risen since 2013, the researchers expect the NRRI will improve when it is updated for the 2016 SCF. The harder trend to predict, however, is what to expect for housing debt patterns in the future.

On the one hand, researchers note that rising home prices could make older homeowners more likely to refinance their mortgages and extract equity than their younger counterparts.

“…[E]vidence indicates that those in their 50s and early 60s were much more likely than younger people to refinance and extract equity during the bubble,” researchers state. “That means that yesterday’s 50- and 60-year-old extractors may be those who carried mortgages into retirement in 2013, suggesting that retiring with a mortgage may be a one-shot phenomenon.”

On the other hand, the researchers indicated three pieces of evidence to support the counter-argument that the rise in retiree mortgage debt reflects a new normal.

First, the trend toward holding mortgages at older ages did not begin with the bubble, rather the percentage has been increasing since the early 1990s, according to the authors’ calculations using the 2013 SCF.

Second, the NRRI suggests that households are becoming increasingly less prepared for retirement, leading some to choose to delay paying off a mortgage in order to build up 401(k) balances.

And lastly, the researchers note that a large number of households have been refinancing to take advantage of low mortgage rates, increasing the likelihood that many of these households will carry these mortgages into retirement. 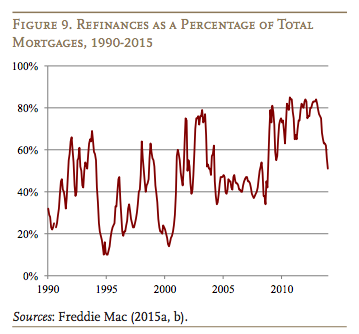 The aftermath of the housing market crash had a number of far-reaching effects on the broader U.S. economy and homeowners nationwide. But for the increasing share of older households carrying mortgage debt into retirement, the impact is more severe.

Looking ahead, it is evident that home prices have been on the rise since 2013. The path of housing debt among older households, however, is less clear.

“The big question is whether the recent high-debt pattern reflects a one-shot reaction to the housing bubble that will gradually fade away or a more permanent habit of carrying mortgages into retirement,” the researchers conclude. “Only time will tell.”