As 10,000 Americans turn 65 every day, many will seek buying a new home where they expect to remain throughout their retirement years. For professionals who work with Baby Boomers and senior clientele, knowing where these adults want to live and why they choose to move are important benchmarks.

Retirement is a key trigger for moving decisions, and many plan to switch up their location upon entering the Golden Years. A large chunk of Boomers—32 million, or 42% of this generation—plan to move for retirement, either upsizing or downsizing, according to a recent infographic report by Metrostudy.

While it might be plausible to think that seniors want to downsize in retirement, the biggest motivator behind moving is area and location; half of Boomers said so. Price/affordability was also an important factor, with 37.4% saying it was a top motivation for moving, while 19% said the layout of a home influenced their choice. 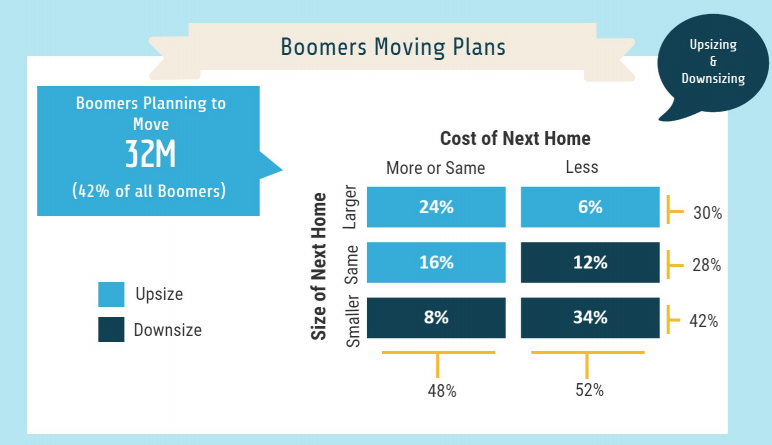 Although some Boomers plan to move in retirement, there are many more who say they want to age in place, according to Metrostudy. However, this option may not be possible for them, as many homes lack accessibility and require lot of maintenance and upkeep.

Only 45% of Boomers described their home as being easy to maintain and only 27% have accessibility features in place for those with special health needs.

As this population seek to change lifestyles during retirement, home sales will likely increase, unlocking a huge source of equity. Baby Boomers hold about two-thirds of the nation’s home equity, about $8 trillion, according to Metrostudy.

Reverse Mortgages Grow by 5 Times in Australia Since 2019