The gap between homeowners’ expectations of their property value and the actual appraised worth of their homes edged closer to equilibrium last month, according to recent survey data. Although the data suggest perceptions and reality are becoming more closely aligned, concerns remain within some housing markets where this divide is widening.

Despite the national trend of owners overestimating their home’s value, appraised values were higher than owners’ estimates in nearly half of the metro areas examined by Quicken Loans.

“While a one and a half percent difference may not seem like a big disparity of home value opinions, the gap could cause problems, especially in areas with an even wider difference,” said Quicken Loans Chief Economist Bob Walters in a release.

Quicken Loans’ analysis varied nationally with some areas, such as Minneapolis, reporting nearly identical estimates and values; whereas  many western cities reported higher appraisals, including Denver, where home values were more than 3% higher than owners’ expectations. In Minneapolis, appraisals were just 0.15% higher than expected.

“In some portions of the Midwest, where appraisals are averaging 2-3 percent less than what was expected, this will often lead to restructuring a refinance or the homeowner needing to bring a few more thousand dollars to the closing table,” Walters said. 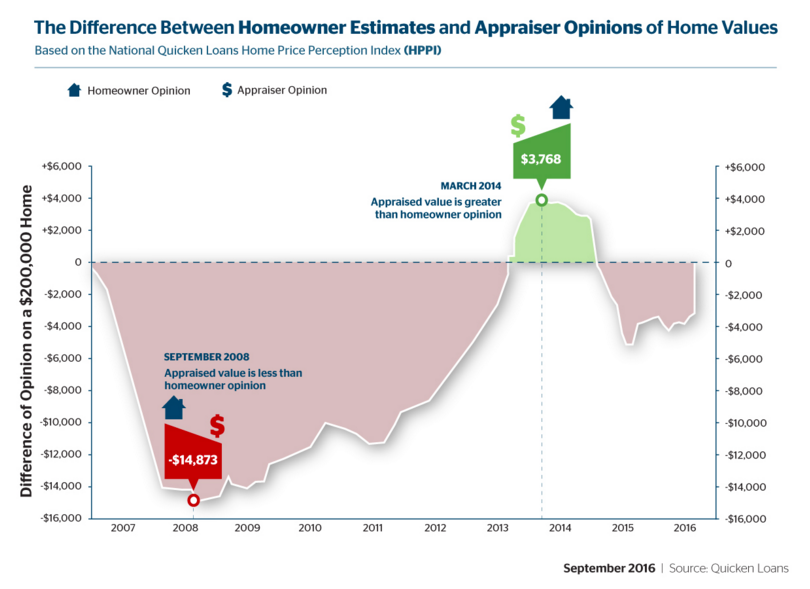 Meanwhile, home prices rose higher in August compared to the previous month, increasing 1.73% over July, and also jumping 8.13% above August 2015, according to the Quicken Loans Home Value Index, which measures home value changes exclusively through appraisals.

Home price increases this year could be attributed to a hot housing market this summer, suggests Walters.

“This spike can concern some buyers, as the increases are outpacing inflation and wage increases, leading to affordability problems in some of the hottest markets,” he said. “However, the pace of home value increases will likely slow as we move into the colder months and there is more balance between buyers and sellers.”