American retirees have historically turned to Social Security, personal savings and pensions to fund their retirement. But as these traditional legs of retirement’s often cited “three-legged stool” have become wobbly over time, retirees must consider alternative strategies to support their longevity, including reverse mortgages and the strategic use of home equity.

Such is the message relayed by Tom Selleck in the latest TV commercial from American Advisors Group (AAG). The TV spot, which launched Thursday, is the second of three new advertisements featuring the Emmy and Golden Globe award-winning actor as the company’s national spokesman.

“Most people thought the three legs of retirement—pension, Social Security and savings—would be enough to get by, but it’s kind of like this three-legged stool I’m sitting on: a little wobbly,” Selleck says in the commercial. “But I think I might have a solution.”

That solution, naturally, is a reverse mortgage, which Selleck emphasizes is important, especially when considering home equity as the “fourth leg” of the retirement “chair” as part of a comprehensive retirement strategy.

“Your home’s equity could add a fourth leg to your retirement plan,” Selleck says, taking a seat in a sturdy living room chair. “Much better. Not a three-legged stool, but a home equity chair. Four legs, more stable.” 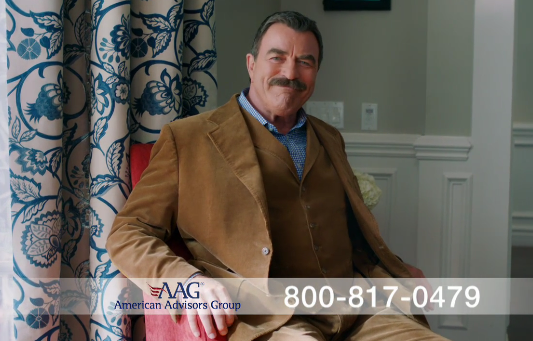 Using home equity for retirement income planning has increasing potential, considering that nearly one-third of retirees have less than $1,000 saved, according to data from the Employee Benefit Research Institute. Often times, the largest asset retirees have is their home equity.

“It’s clear that many older Americans will need to consider home equity as a source of retirement income, and a reverse mortgage is a way to access that equity,” said AAG Chief Creative Officer Teague McGrath in a press release. “Selleck’s widespread appeal will surely bring a much needed spotlight on this issue—and on reverse mortgage loans as viable retirement solutions.”

The latest commercial follows the debut of Selleck as AAG’s newly announced spokesman. The first commercial of the Selleck series, titled “Too Good to Be True,” premiered in early August and has already outperformed all other commercials aired by AAG.