Reverse mortgage volume is lagging behind its year-ago levels, and that’s no secret. But while the greater industry feels the strain of sluggish endorsement production, certain markets are brimming with activity, recent industry data indicates.

Through the first half of 2016, endorsements of Home Equity Conversion Mortgages (HECMs) through totaled 24,634 units, a decrease of 13.1% compared to the same year-ago period in 2015, according to most recent analysis from Reverse Market Insight.

At the midpoint, it appears as though 2016 is on track to be be one of the lowest volume years the industry has seen in the last decade. And with July’s numbers coming in at 3,534 units, the volume trend line is primed for an ever further dip below recent comparable years. 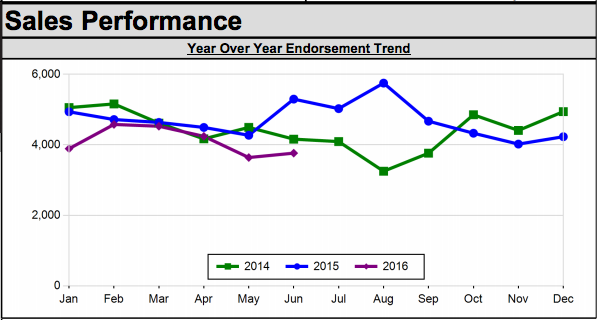 More than half of the top-10 states tracked by RMI report year-to-date declines in endorsement volume through June, with New York posting the greatest year-over-year decline of 36% compared to the first half of 2015. In terms of unit count, New York ranked fourth among all states with 1,109 loans.

Other top-producing states, such as Pennsylvania and New Jersey, reported big drop-offs of 35.2% and 32.2%, respectively, in their endorsement volume through June.

Meanwhile, California, which continues to rank first among all states in terms of unit count with 5,552 loans YTD through June, reported a growth of 4.4% compared to its year-ago endorsement production.

But the state seeing the biggest boost in production was Colorado, whose 900 loans throughout the first half of 2016 represents an increase of 27.3% compared to last year.

The hefty gain is due in large part to Colorado’s largest city, Denver, which ranked second among the top-10 city’s for endorsement volume. Through June, Denver reported 208 loans, a 65.1% growth compared to its year-ago volume. The Mile High City came in 61 loans short of Los Angeles and just three loans over Houston, which reported 0.5% growth in its YTD volume through June.

The City of Austin, Texas, also deserves honorable mention as it “busted” into the top-10 city rankings with 129 loans during the first six months of 2016, representing an increase of 34.4% compared to the same period last year.

In total, the top-10 cities accounted for 1,724 loans YTD through June, a decline of 9.2% compared to last year. The decrease is understandable, considering that six cities reported lower endorsement volume compared to their year-ago production.

View the RMI report to see where other reverse mortgage markets stacked up during the first half of 2016.