Never a generation to shy away from the norm, Baby Boomers are changing what it means to be an older homeowner in the U.S., according to a recent study.

“Baby Boomers—like Peter Pan—refuse to grow older,” says a new Freddie Mac report titled Fun After Fifty. “Instead of moving to seniors-oriented communities, they ‘age-in-place’ or, even better, move into the hear of a walkable city.”

The age 55 and older population represents a little over a quarter of the U.S. population, but they control roughly two-thirds of the equity in single-family homes, according to U.S. Census Bureau data.

What this generation plans to do with their own housing, the impact of these decisions reverberates throughout the U.S. housing market and has an effect on younger homebuyers.

“Their numbers and their housing wealth guarantee that the housing decisions of older homeowners will play an outsized role in shaping the housing opportunities available to the generations that follow them—Gen X and the massive Millennial generation,” states the Freddie Mac report.

There are several factors at play that are influencing the housing preferences of Baby Boomers and other older homeowners, including longer labor force involvement, aging in place desires, and certain financial issues that contribute to having a financially comfortable retirement.

After “bottoming-out” in the mid-1990s, the labor force participation rate of the 55+ population has been increasing. In 1995, roughly 30% of adults age 55 and older were active participants in the labor force. By 2015, this share of workers grew to approximately 40%.

One of the most common opinions expressed by adults aged 55 and older was that they want to age in place. When thinking about their preference to relocate, 63% said they want to remain stay in their current residence, while 37% said they would like to move at least one more time.

Although the vast majority of Boomers said they want to continue living in their current homes for as long as possible, many face financial challenges when it comes to retrofitting their properties to accommodate their needs as they age.

About 33% of respondents said they plan to tap into their personal savings to fund the costs of home renovations and repairs, whereas just under 20% said they wouldn’t be able to make the needed adjustments to their residences. 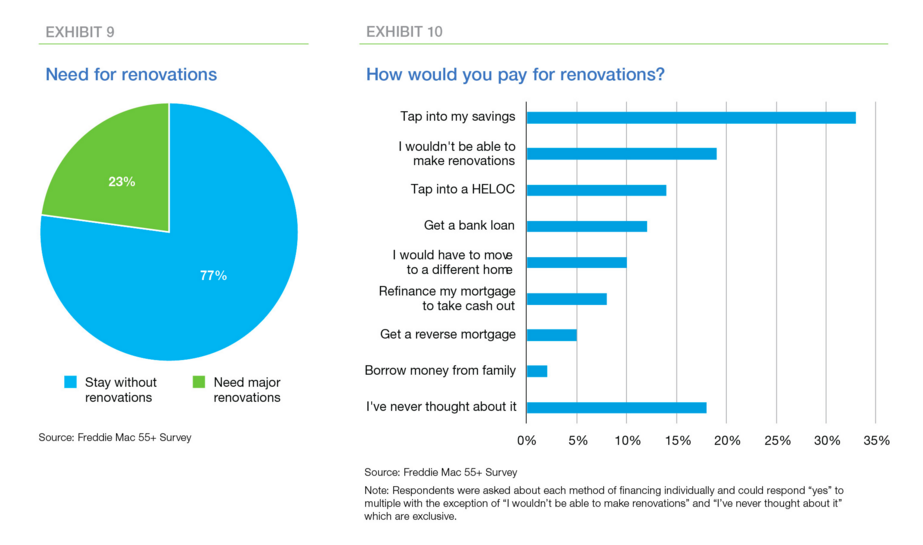 A sizable share of the survey sample plans to age in place, but in a “different” place from their current home. For many of them, that place will be another house.

These findings suggest that roughly 18 million 55+ homeowners may be shopping for another house in the next few years, according to Freddie Mac’s analysis of the survey data.

Freddie Mac also asked questions designed to measure the perspective of older Americans on their financial well-being. For the most part, researcher found that respondents feel financial secure and happy with their housing situation.

Even with these feelings, more than a third of older Americans said they still have a mortgage, and a majority of those with a mortgage have more than 10 years left until the balance is paid off. 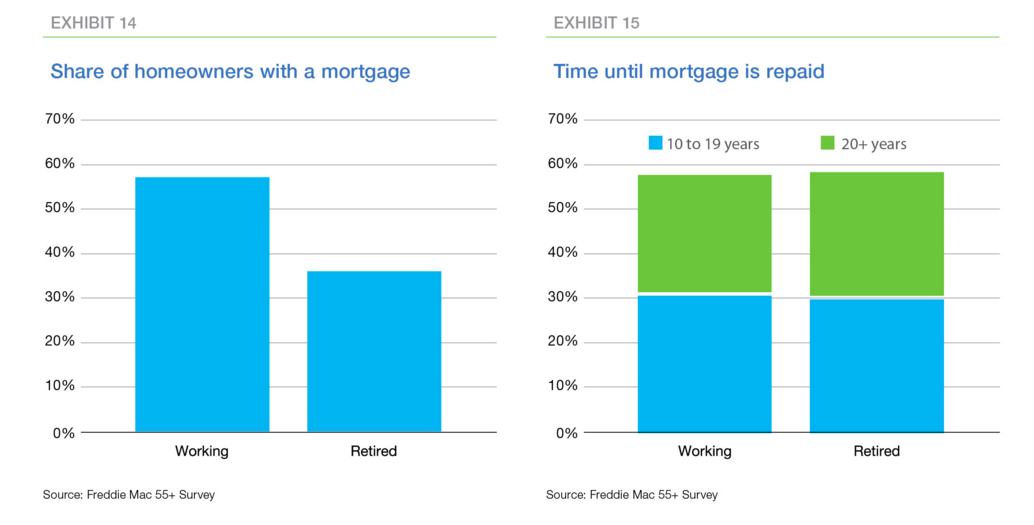 The conventional wisdom on the “housing life cycle,” according to Freddie Mac Chief Economist Sean Becketti, means Millennials should be providing a surge in first-time homebuyers, while older generations move onto the next stage of their housing life. This includes Baby Boomers, who should be downsizing and selling their homes to Gen-Xers, or moving to an age-specific community.

For the most part, people are largely ignoring this conventional wisdom.

“Millennials are taking longer to marry, start families, and buy their first homes,” he said. “And the 55+ population are working longer, aging in place, or buying an additional home (or two) rather than winding down. Furthermore, they expect to be an active part of our housing economy for quite a while longer. Apparently there is a lot more fun after 50 than there used to be.”

Diving Deeper Into Data Saying 700,000 Seniors Remain Behind on Mortgages