Apart from a slight uptick from January to February, reverse mortgage volume has been on the decline for most of 2016. But as industrywide volume sinks further from year-ago levels, as always, there are some markets that buck the falling trend line.

Home Equity Conversion Mortgage (HECM) endorsements totaled 20,871 units through May 2016, representing a 9.4% decrease compared to May 2015, when volume totaled 23,048 loans, according to the latest data report from Reverse Market Insight (RMI).

Although volume improved slightly in June, 2016 endorsements remain well-below both last year’s totals and those of 2014. As a result, just four of the top-1o states tracked by RMI reported volume growth year-to-date (YTD) through May 2016. 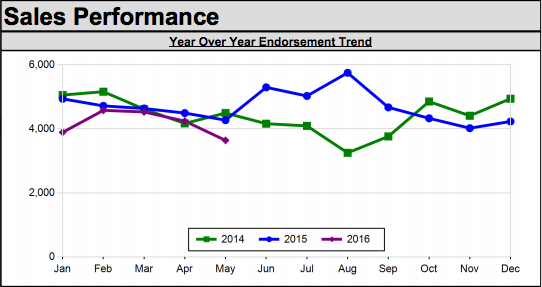 California, forever the largest producer of HECM volume, led the way with 4,702 units YTD as of May, signaling an increase of 8.1% from this time last year.

The largest percentage growth belonged to Colorado, which at 45.7%, reported 765 total units to claim the fifth-ranked spot overall; ahead of Arizona, whose 748 units represent a modest increase of 1.6% from last year. Meanwhile, Washington rounded-out the top states reporting growth, with 577 total units in May YTD, an increase of 24.1% from the previous year.

Denver gave a considerable boost to Colorado’s overall endorsement volume. The city accounted for 154 total units through May 2016, reflecting a 53.9% growth over last year.

The top spot among cities was Southern California-owned, by ways of Los Angeles and San Diego, which reported 232 and 174 units, representing gains of 2.2% and 16.8%, respectively.

To see where other states, cities and counties stacked up through May 2016, view the RMI data.