Baby Boomers will reshape the U.S. housing market as this massive demographic as they approach their retirement years with substantial amounts of home equity. But when it comes to their aging in place preferences, millions of Boomers would rather rent than own a home in their later years, according to a new survey from Freddie Mac.

An estimated 6 million homeowners and nearly as many rents aged 55 and older prefer to move again at some point in their lives, based on findings from the first Freddie Mac 55+ Survey of housing plans and perceptions of people born before 1961.

Of those who expect to relocate, over 5 million indicate they are likely to rent by 2020. Among those age 55-plus renters who plan to move again, 71% plan to rent their next home rather than buy.

“When a population this large expects to move into less expensive rental housing, we have to expect it will create significant new pressure on both the supply and cost of existing affordable rental housing,” said David Brickman, executive vice president at Freddie Mac Multifamily, in a written statement. 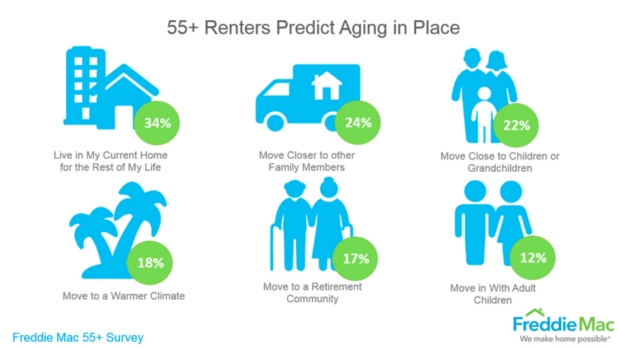 The survey findings underscore the need for additional affordable rental housing in the U.S., especially considering 47% of renters aged 55 and older say they struggle from paycheck-to-paycheck, while 13% admitted they sometimes cannot afford basic living expenses until their next payday.

Affordability is a “very important” factor influencing Boomers’ next move, with 60% of survey respondents saying so. Meanwhile, just under half (47%) of Boomers say their biggest deciding factor for relocating depends on amenities needed for retirement; while 44% want to live in a community where they are no longer responsible for caring for the property.

For a majority of Boomers, relocating doesn’t necessarily mean moving across the country.

Although the majority of Boomers say they would rather become renters than homeowners in their later years, a sizable share of this population actually does plan to age in place within their current residence.

The survey also found significant differences between the housing expectations of older adults who haven’t retired and the housing choices retirees have actually made.

As for other renters who predict they will age in place, 22% say they plan to move closer to children or grandchildren, while 12% plan to move in with their adult children.

Contrast to popular “snowbird” perceptions, just 18% of Boomer renters say they plan to move to a warmer climate for their aging in place needs.

Conducted by GfK on behalf of Freddie Mac, the Freddie Mac 55+ Survey is based on responses from nearly 6,000 homeowners and renters.