National home prices experienced modest growth through April, however, a sharp quarterly increase in the West has the housing market poised for a strong summer season, according to one recent analysis.

At the national level, home prices posted a 0.6% quarter-over-quarter growth, as indicated by May’s Clear Capital Home Data Index (HDI) Market Report. The report, which releases recent and granular data through April 2016, provides insights into housing price trends and other indices for the real estate market, at both the national and local levels.

Home price appreciation varied across regions, with the Northeast and Midwest each posting a 0.2% quarterly growth, while the South grew 0.7%. These growth figures all represent little to no change from previously reported quarterly growth rates, as all were within 0.1% of their figures from last month.

The biggest growth story was out West, where Clear Capital notes that sales during April have “really kicked off” the start of the real estate buy season. Quarter-over-quarter, prices in the West increased from 0.9% to 1.2% since just last month—a momentum shift that Clear Point says is setting the pattern for another strong summer growth season. 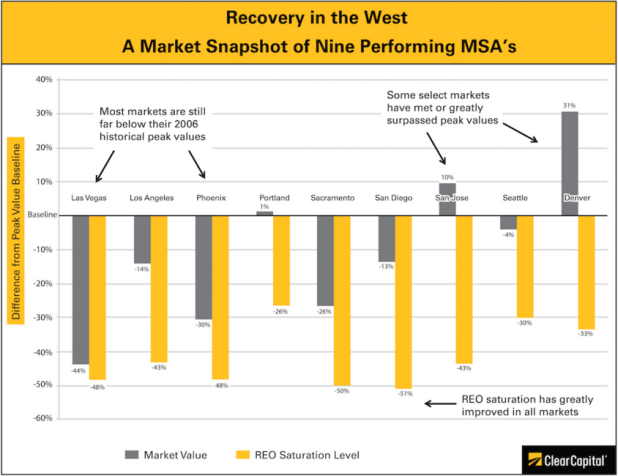 “Real estate market headlines have repeatedly documented the strong, potentially bubble-like recovery of the West over the past couple years, and this continued trend of performance doesn’t appear to be going away just yet,” said Alex Villacorta, vice president of research and analytics at Clear Capital, in a written statement.

To illustrate the dominance of the West compared to other regions, nine of the current top-15 major metro markets tracked by Clear Capital called the West home. Of these metro areas, Seattle continues to lead the nation at 2% growth over the last quarter, an increase of 0.2% since last month.

Meanwhile, Sacramento grew 0.3% to 1.5% quarter-over-quarter, and the rest of the Western top markets are all reporting at least 1.2% growth over last quarter. All growth considered, Villacorta notes that it’s important to remember just how varied the standing of each of these Western metro’s recoveries remain.

“While the West as a whole has seen incredible performance since the lows of 2011, comparisons between individual markets like Denver and Las Vegas can be a sobering reminder of the devastating effects of the crash and that some markets still have a long way to go in terms of regaining lost value,” Villacorta said. “Conversely, those markets that are reaching new market highs are worth keeping a close eye on since the speed at which those recoveries have occurred is clearly unsustainable in the long term.”