With some reports indicating home prices have risen in more than a quarter of U.S. housing markets, it’s no surprise that values continued their steady climb to start off 2016, according to the most recent home price data released by S&P/Case-Shiller.

January’s increase was supported by similar growth in both the top-10 and 20 major U.S. housing markets, with the 10-City Composite tracked by S&P/Case-Shiller up 5.1% for the year, and the 20-City Composite up 5.7% year-over-year. 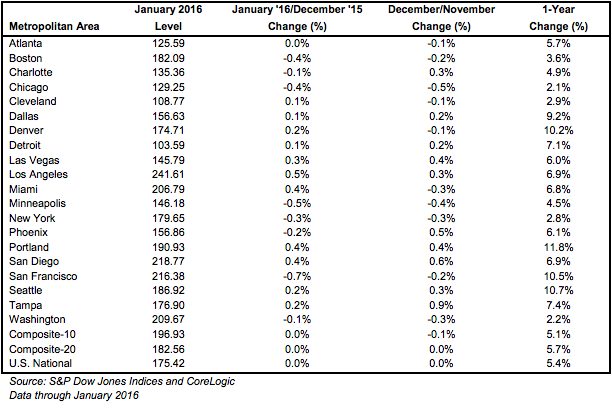 “Home prices continue to climb at more than twice the rate of inflation,” said David M. Blitzer, managing director and chairman of the Index Committee at S&P Dow Jones Indices, in a written statement.

Eleven cities also reported greater price increases in the year ending January 2016 compared to the year ending December 2015, with the western part of the country seeing the largest price gains in the past year, and the northeast seeing the weakest.

Low housing inventories and short supply are boosting home prices, however, financing continues to be a concern for some potential purchasers, particularly young adults and first-time homebuyers, Blitzer said.

“While rising home prices are certainly a factor deterring home purchases, individual financial positions are more important than local housing market conditions,” he said. “One hopeful sign is that the home ownership rate, at 63.7% in the 2015 fourth quarter, may be turning around.”