February’s Home Equity Conversion Mortgage endorsements breathed some new life into reverse mortgage volume in 2016, with unit counts up nearly 18% from January’s slow start. As the second month of 2016 fades further away in the rear view mirror, the growth story for February was a tale of 10 cities.

On an industrywide basis, HECM endorsements rose 17.7% in February to 4,579 loans, effectively marking the highest single-month of volume since September 2015’s total of 4,671 units, according to the most recent data from Reverse Market Insight (RMI).

Gains across nearly every region tracked by RMI fueled February’s growth numbers, with the only exception being the Mid-Atlantic, which reported just 9.7% less endorsements than it did the previous month. And while many of the largest metro areas saw their volumes increase on a monthly basis from January, some of the largest growth was more widespread, reaching markets both big and small.

For instance, Little Rock, Ark. reported the largest monthly increase in HECM endorsement volume in February. The market added just 36 units during the month, however, this reflects a 125% increase from the 16 loans reported in January. 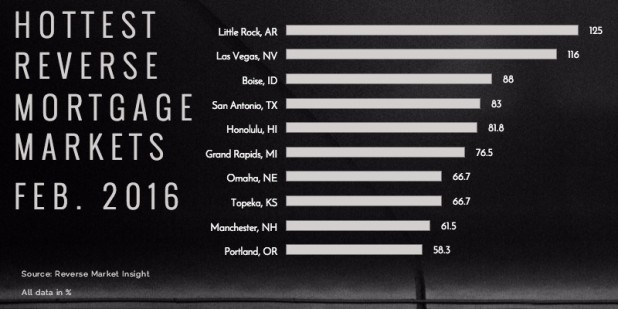 Meanwhile, the Pacific/Hawaii also had a strong performance in February, leading the way with 1,321 units—the most of any other region tracked by RMI. Collectively, the region reported a 21.2% increase in HECM endorsements compared to the previous month, propelled by two markets which ranked among the top-10.

Las Vegas, whose 54 loans represented a 116% increase over January, led the way and ranked second overall in terms of monthly volume growth.

Nearly every market tracked in the Pacific/Hawaii region reported a monthly increase during February, except for Tucson, which saw endorsements drop 9.5%. This hiccup was overshadowed by sizable gains coming from Honolulu (81.8%), Reno (56.5%), San Diego (46.1%) and Sacramento (37.3%).

The Northwest/Alaska was also strongly represented by Boise and Portland. Boise, which reported 47 loans during February, grew 88%, whereas Portland’s 95 HECMs contributed to the market’s 58.3% from the prior month.