Although the Home Equity Conversion Mortgage (HECM) program has witnessed its share of challenges in recent years, it continues to prove itself as a fundamentally sound component of the Federal Housing Administration’s Mutual Mortgage Insurance Fund, according to one top-ranking official from the Department of Housing and Urban Development (HUD).

Recent audits and other financial indicators of the MMI Fund have shown an improvement in FHA’s position to serve both forward and reverse mortgage borrowers. But while traditional forward loans represent the vast majority of the FHA’s financial health, a discussion of the role and performance of the HECM program is warranted, said HUD Principal Deputy Assistant Secretary Edward Golding, testifying last week during a hearing before the House of Representatives Committee on Financial Services, Subcommittee on Housing and Insurance.

Golding, who testified on behalf of the financial health of FHA’s Mutual Mortgage Insurance (MMI) Fund, highlighted significant improvements to the overall HECM book of business, which helped drive the Fund past its Congressionally mandated 2% capital ratio for the first time since 2008.

Although the HECM portion of the MMI Fund represents a substantially smaller share compared to the FHA’s forward mortgage book of business, an independent actuarial review last November revealed a $7.9 billion gain in economic value of the HECM program in Fiscal Year 2015.

“It has become clear in recent years that the HECM portfolio, as part of the MMIF, has a significant impact on value relative to size,” Golding said in his prepared testimony. “As such, a discussion of the role and performance of the program is warranted.”

“While the overall performance of the MMIF is strong and continuing to improve—it is important to acknowledge areas where results are more variable,” Golding said.

Compared to the Forward portfolio, which has steadily increased in value over the last three years, the HECM program, though it reported strong numbers in FY 2015, is prone to more variability.

“Since the program is dependent on the market value of the property used as security, the HECM portfolio can experience significant swings in value year over year as the market factors that influence the present value of future home price change,” Golding said. “The changes in these market factors, in turn, alter the projected losses on and values of loans in the portfolio.” 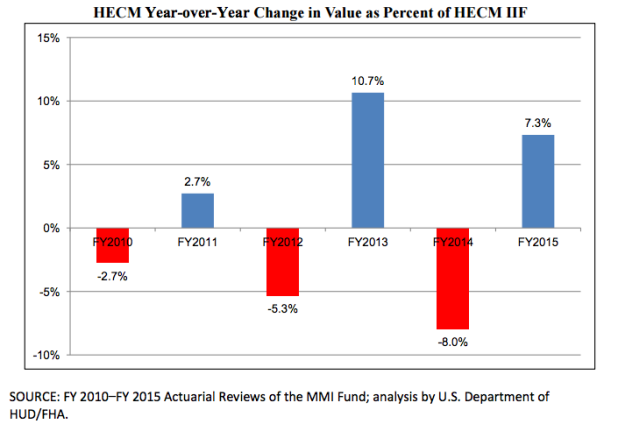 Two characteristics unique to the HECM program are largely responsible for the program’s sensitivity to economic changes, Golding noted.

For one, HECMs are characterized by a significantly longer weighted average life than standard mortgages—over 15 years for HECMs compared to about six years for Forwards. These longer maturities mean greater discounting and sensitivity to changes in interest rates over time, Golding said.

The other sensitivity characteristic pertains to FHA being more likely to own the proceeds of selling the house secured by a reverse mortgage in the HECM market, effectively making home price appreciation a major consideration in the value of the portfolio. Also, because lenders can assign loans to FHA when the unpaid principal balance reaches 98% of the maximum claim amount, FHA is left holding the asset as ownership is transferred to the agency.

Considering these two traits, the HECM portfolio is faced with unique challenges that stand to impact the financial health of the MMI Fund. But even such volatility has yet to discourage HUD officials from seeing promise in the HECM book of business.

“Despite these challenges, the HECM program itself is fundamentally sound—in part due to the assistance that FHA received from Congress,” Golding said. “As a result, FHA has issued considerable guidance to ensure the sustainability of HECM for borrowers and initiated new requirements to better manage FHA’s risk.”

Now in 2016, with the benefit of at least two years of data, FHA is able to see the impact of its changes on the HECM program.

Also, with the advent of initial upfront draw limitations, equity draw patterns have also changed in recent years. In 2013, 46% of borrowers drew 60% or less of the available HECM proceeds at loan closing compared to 65% of borrowers in 2015. Additionally, preliminary HUD data on draw patterns indicates that limiting draws during the first 12 months of the loan does not lead to larger draws after the first 12 months.

This data suggests that reducing the amount borrowers can take on early could improve their capacity to use home equity when they might need it most, Golding said.

“FHA feels that it has effectively responded to the programmatic issues affecting the loan level performance of HECM,” he said. “Improvements like the provision of greater lender flexibility to use loss mitigation for eligible borrowers, limiting the amount of money that can be taken from the property, and removing riskier HECM product options, appear to have proven useful in reducing losses to the Fund.”

When the U.S. emerged from the financial crisis of the last decade, discussions of the health of the MMI Fund largely focused on the prospects of FHA’s forward mortgage portfolio. Looking ahead, as the economy improves and the nation continues to move further from the worst of the recession, Golding said the future will also hinge upon the performance of the HECM program and its impact on the FHA’s book of business.

“In recent years, it has become clear that the future health of the Fund also depends on the progress of the HECM portfolio,” he said. “FHA is looking forward to working with Congress and its industry partners to make progress on better understanding the benefits and risks of the HECM program.”