Endorsements for Home Equity Conversion Mortgages (HECMs) hit a minor snag in the last few months of 2015 as the industry felt the fallout of the Financial Assessment. But as volume compressed in the months following August, the share of reverse mortgage refinances have grown to near-high levels, according to recent industry data.

In November, 11% of all HECM endorsements were refinances, according to the latest Reverse Market Insight (RMI) data released Tuesday. During the month, while endorsements fell 7.1% from October to 4,023 loans, the share of refinances rose one percentage point, up from October’s from 10% refi share.

The jump to 11% marks the highest refi share of volume since August 2015, which reported 5,750 loans, and is second only to February 2009, when HECM refinances represented 12% of volume.

“Refinances have been a hot topic in the reverse mortgage industry lately, with NRMLA issuing updated guidelines and HMBS investors asking more questions about the higher prepays than they might have expected when paying significant premiums for new pools,” writes RMI in its HECM Trends – November 2015 newsletter. 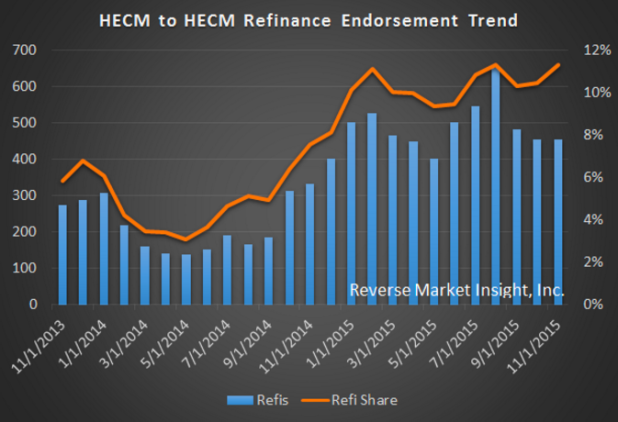 Late October, the National Reverse Mortgage Lenders Association (NRMLA) issued an ethics advisory aimed at preventing instances where HECM refinances do not provide a bona fide advantage to the borrower.

In efforts to prevent such “loan churning,” the NRMLA guidelines institute an 18-month seasoning requirement, where the new FHA case number shall not be sooner than 18 months from the date of the prior loan closing.

Given the ethics advisory arrived in late October/early November, and considering the delay between loan applications and endorsements, it is possible that refis have already experienced their largest shares of volume in the months following November.

“We’ve already seen refinance activity reduce significantly on the application side since the NRMLA ethics advisory, so given the timeline of applications to funding and then endorsement, we’d expect to see endorsement figures start to show a lower share attributable to refinance transactions by February or March,” Lunde said.

In 2014, HECM refis represented 5% of total reverse mortgage endorsements, an increase of 15% from the prior year.