Adult children often get skittish when their parents are taking out a reverse mortgage, mainly concerned that doing so will fritter away their inheritance. Those concerns, however, are largely unfounded, especially if the reverse mortgage is used strategically and the proper estate management is in place following the borrower’s death, says one tax lawyer and reverse mortgage researcher.

Through the judicious and responsible use of a reverse mortgage, a borrower can actually provide heirs with a substantial bequest in the form of a securities portfolio, the money from which they may be eligible to receive tax-free, according to a presentation at last month’s NRMLA conference in San Francisco by Barry H. Sacks, J.D., Ph.D, a practicing tax attorney.

A reverse mortgage accrues interest over a long period of time, but the interest is not deductible until it is actually paid. The tax law that dictates how much of the accrued interest is deductible, and under what conditions.

If the estate management is done well, Sacks said there is a deduction available to reverse mortgage heirs that would otherwise be lost under the conventional approach to estate planning, where the estate sells the home and distributes the proceeds among heirs and beneficiaries.

“This deduction would be lost in the conventional way that estate planning is done, but it can be recovered if the deduction can go to those children so they will get not only a great big 401(k) account left over from their parent, whose account has been enhanced by the judicious use of a reverse mortgage credit line, but they will also get that money tax-free—or at least a portion of it to the extent of the deduction,” he said.

This strategy can be appealing to the emerging group known as the “mass affluent.”

The “mass affluent” is a term used to describe Baby Boomers who are nearing retirement. It’s a misleading term in that these Boomers are not massively affluent, rather there is a mass quantity of them and they are almost affluent.

Typically, members of this group have between $750,000 and $2 million of net worth at retirement; they primarily rely on investments in their 401(k) or rollover IRA; and their homes are mostly paid off.

Mass affluent retirees have three objectives, Sacks noted. First and foremost, they want cash flow sustainability, meaning they want to have enough funds to last them throughout retirement. Second, they also want to retain some financial cushion in the course of their retirement to be available in the event of an emergency. Third, they want to pass assets onto their heirs and beneficiaries, also known as a bequest motive.

In previous research, Sacks pointed out that mass affluent retirees can achieve all three of these goals without sacrificing one for another. And that’s where a reverse mortgage comes into play.

“The point is, you may erode a little bit of the home equity, but you’re adding a lot more to the overall value of the securities portfolio,” he said.

But for a retiree who wants to downsize into a smaller home, using a Home Equity Conversion Mortgage (HECM) for Purchase can help them better achieve their three retirement objectives while preserving their securities portfolio and providing a favorable deduction to heirs following the death of the reverse mortgage borrower.

HECM for Purchase vs. IRA

Consider a retiree who has an IRA of $1 million, a home value of $1.1 million with a mortgage of $500,000—thus, providing equity of $600,000. This person wants to sell their home and downsize to a house that will cost $850,000. Additionally, the retiree will need about $45,000 per year (inflation-adjusted), plus Social Security for living expenses.

All of this criteria was posited by Sacks during his presentation to show an illustrative example of a strategy that enables retirees to advance their three retirement objectives (cash flow sustainability, preserve funds for emergencies and bequest motive).

The second method: obtain a HECM for Purchase for $250,000, thus leaving the IRA untouched at $1 million.

While both methods are viable solutions to help the retiree purchase the new home, each has a very different impact on cash flow and the probability of it running out over the course of retirement.

After running Monte Carlo simulations for both scenarios, Sacks finds the probability of cash flow surviving 30 years in retirement is only 30% if the retiree does the IRA transaction. That means there is a 70% likelihood of running out of money during a 30 year retirement. 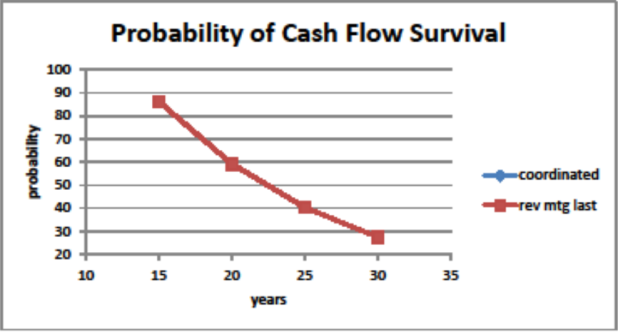 Whereas if the retiree took the HECM for Purchase, he would get better than an 80% probability of cash flow survival out to 30 years, and about a 90% probability at 25 years, according to the Monte Carlo simulations. 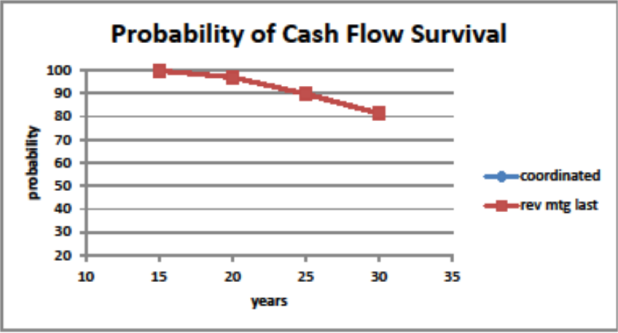 Both scenarios directly advance the first retirement objective of cash flow sustainability, but also meet the other two objectives as well. So the next step in realizing the deduction accessible to heirs is calculating how much interest has accrued.

Interest is easy to estimate, Sacks noted, since the loan principal is all taken at the outset of the transaction and there isn’t the problem when different amounts of principal are taken at different times. The interest rate, however, varies.

Even when assuming the interest rate is somewhere between 6% and 8%, the total interest that will have accrued over time will amount to numbers in the several hundred thousand dollar range.

“That’s a lot of interest and that could be deductible,” Sacks said.

Determining how much the IRA account is likely to be worth in 15 years and beyond is not as simple as calculating accrued interest, because a portfolio of securities—particularly one that is being drawn upon—can have any value in a whole range of potential values, Sacks noted.

After running several simulations, more than 70% of the potential outcomes are values of $1 million or greater with the reverse mortgage transaction at least 15 years later. That means there is greater than a 70% likelihood that there will be more than $1 million in the IRA. Meanwhile, if the retiree used the IRA transaction method, at 15 years there is only a 12% probability that they will have that much money.

What these simulations indicate, Sacks noted, is that there is a very high likelihood that, if the interest amounts shown are deductible, then there is plenty of IRA value which the deductions could be taken upon distribution from the IRA.

The Internal Revenue Code (IRC) allows deductible interest secured by a residence if it falls under the category of Acquisition Indebtedness.

Acquisition indebtedness is defined as indebtedness that is incurred for the acquisition, construction or improvement of a qualified residence of the taxpayer and is secured by that residence. This also includes any refinancing of such indebtedness, but only up to the limit of the outstanding principal at the time of refinancing. The IRC allows interest to be deductible if the Acquisition Indebtedness is on a debt less than $1 million.

“You saw [earlier] that there were several hundred thousands of dollars in the interest,” Sacks said. “That would enable the heir who gets the house to sell the house, and that’s how that interest deduction would become available—it’s available to the person who pays it off.”

The central point in this grand recipe Sacks laid forth is that the conventional approach to estate management—where the estate sells the house, pays off the reverse mortgage and divvies up the proceeds among heirs—wastes the possible interest deduction.

“Instead of the estate selling the house and paying off the reverse mortgage, the proper estate planning to achieve this result is to have the heir and beneficiary of the 401(k) or the IRA get the house directly, then sell it, because that’s the person who gets the deduction under the regulation,” Sacks said.

In other words, whoever happens to do the selling gets the deduction. This strategy may need to be written into the client’s will or trust; and an arrangement must be made between the borrower, borrower’s heirs and the reverse mortgage lender or servicer on how the house is going to be disposed of.

The HECM for Purchase example explained earlier is the ideal situation for the Acquisition Indebtedness treatment, according to Sacks, who noted that the clear purpose of the reverse mortgage is the acquisition of a personal residence. And under such treatment, the entire amount of the accrued interest is deductible when paid.

Though complicated in nature, this strategy may ultimately diminish one of the most common qualms of heirs believing that their parent’s reverse mortgage fritters away their inheritance.

“In fact, the adult children are dead wrong because by taking a reverse mortgage and using it strategically, the parents are actually enhancing their heirs’ inheritance,” Sacks said. “They’re boosting—and by a lot—the overall value of their securities portfolio.”

This, Sacks added, creates synergy and a “positive sum game,” where a relatively small reduction in the home equity results in a much larger increase in the value of the securities portfolio.

“Moreover, by thoughtfully planning or administering the estate, these heirs are going to get some, or all, of that securities portfolio free of income tax,” Sacks said. “It’s a pretty good result, especially if you’re a tax lawyer.”

Editor’s note: The second graph shows the cash flow survival probability if the $1 million is left in the IRA and, instead, a reverse mortgage is taken to obtain the needed $250,000. This graph, which shows a high probability of cash flow sustainability, exemplifies using the HECM for Purchase strategy and not using a reverse mortgage as a last resort. Please disregard the graph legend.