Last week, the Federal Reserve announced the first increase in the fed funds rate in nearly a decade. Given the modest rate hike was only between 0.25%-0.5%, the total dollar amount of mortgage originations next year are expected to be lower than 2015 levels, forecasts the Mortgage Bankers Association (MBA).

Overall, MBA expects mortgage origination volume will be down next year due to a reduction in refinances, however, the positive impact of the improving economy on home purchases will offset this reduction.

“Our estimates for originations in 2015 remain unchanged from last month, reflecting a combination of rate driven refinance activity earlier in the year and continuing purchase market growth,” MBA writes in its forecast commentary.

For 2016, MBA expects $905 billion in purchase originations, however, rates will likely continue to rise and cause refinances to drop to $415 billion for a total of $1.32 trillion in origination volume for the year. 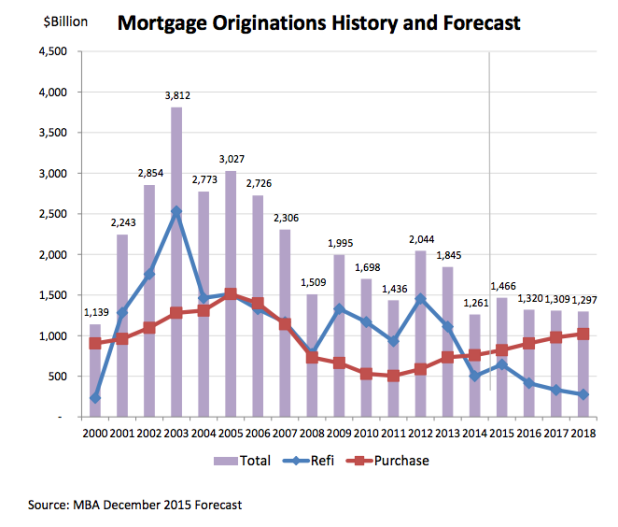 From 2016 on, MBA expects that the level of purchase originations will continue to increase before reaching the $1 trillion mark in 2018.

The Fed’s rate increase marks the first time since 2008 that the target fed funds rate has been above zero. It also signals confidence in the future growth of the economy, as the unemployment rate is at running at 5% with employment growing, and core CPI inflation is at 2%.

“From a mortgage market perspective, as we move forward, it will also be important to carefully monitor the Fed’s plans with respect to their balance sheet investment in mortgage backed securities,” writes MBA.

Rates spiked briefly after the Fed’s decision to raise rates, but fell slightly in the days following, MBA notes. With just two weeks left in the fourth quarter of 2015, MBA forecasts the 10-year Treasury rate looks poised to average around 2.2% for the quarter.

As the economy continues on its path of growth, MBA expects rates to increase slowly, wit hthe 30-year fixed mortgage rate expected to average around 4.5% in 2016, compared to an average of around 3.8% thus far in 2015.