Home Equity Conversion Mortgage (HECM) endorsements fell 7.3% in October compared to the previous month, bringing yet another month of declining loan counts. But as estimates point toward a higher full-year tally than 2014, volume over the past few months has been trending closely to the last time the industry exceeded 60,000 units, according to the latest reverse mortgage market data.

Year-to-date, HECM endorsements through October have hit 48,114 total units, an increase of 10.3% from the comparable period last year, according to Reverse Market Insight data released Tuesday.

October, whose single month total was 4,332 units, represents the second consecutive month since August where volume has fallen—and a near mirror image of how volume was trending during this same three-month period in 2013. 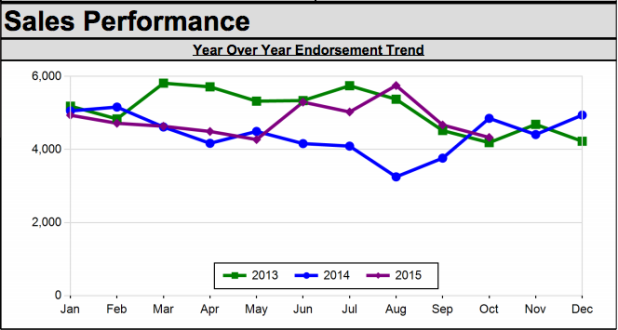 Comparing August to October volume between 2013 and 2015, endorsement counts trended in a similar direction, though this year’s monthly totals overshadowed 2013’s numbers.

But with just one month of estimation left in 2015, RMI suggests that full-year volume is trending toward 56,000 HECM endorsements.

“That would put this year just about the midpoint of the past two years, which matches pretty close to the way it felt living through all three,” RMI stated. “Here’s to ending a year for the first time in recent memory without anticipating another shoe falling for the industry!”