Last month, the Federal Housing Administration (FHA) revealed a $19 billion gain to the economic value of its Mutual Mortgage Insurance (MMI) fund in Fiscal Year 2015, driven in part by a nearly $8 billion growth in the reverse mortgage book of business. While this performance signaled a welcoming improvement for the MMI fund, a new report suggests that FHA is misleading in the way it calculates its financial status.

Overall, the MMI fund in FY 2015 stands at an economic net worth of $23.8 billion. This amount is comprised of the Home Equity Conversion Mortgage (HECM) portfolio and FHA’s single-family forward mortgage portfolio, which grew roughly $11 billion to an economic value of $17 billion in FY 2015.

Taken as whole, the HECM portfolio represents about 9% of total FHA lending, with the current insurance in force for the forward portfolio at $1,046 billion and only $105 billion for the entire HECM book of business.

Since 2009, the FHA has calculated the value of its MMI fund by lumping together its traditional forward loan portfolio and its smaller reverse business. But the agency may be neglecting to show an accurate depiction of how each loan program performs financially, according to a report published this week by the Urban Institute.

Because of this, Goodman suggests the FHA should separately assess the financial solvency of its forward and reverse mortgage businesses starting in 2016, and for a number of reasons, mostly due to the volatility of the HECM program and its susceptibility to changes in interest rates.

The $7.9 billion increase in the HECM portfolio for FY 2015 lifted the program’s net worth from a deficit of $1.17 billion in FY 2014 to a value of positive $6.78 billion. The performance of the HECM book also showed huge swings over the years, varying between negative and positive territory from FY 2012 to 2015 (Click chart below to maximize image size).

“Despite its small size, this high volatility makes FHA’s much larger and more stable portfolio appear more volatile than it really is,” Goodman writes. 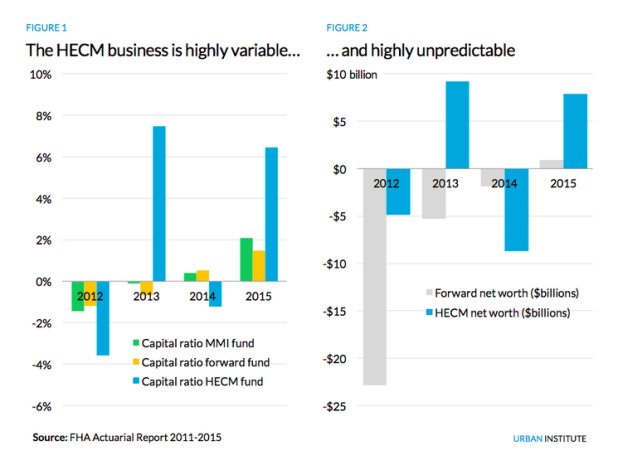 The HECM business is also highly unpredictable, Goodman adds, since it is more closely linked to interest rate changes than the value of the majority of FHA’s business.

The relationship between interest rate changes and value swings also offer up something of a catch-22 when it comes to policy changes.

“Given the close tie between interest rates and HECM swings, the accounting effect of policy changes in the HECM program are dwarfed by changes in interest rates,” Goodman writes. “Yet, when FHA reports that the MMI value exceeds or fails to meet expectations, a call for new policies is inevitable.”

Public policy would be better served, Goodman suggests, if there was a more accurate picture of the status of both programs, then each of them could have their own tailored policy changes accordingly.

An example relates to the calls from various mortgage industry groups who view the improvement in the MMI fund as an opportunity to cut premiums, however, in actuality, the 1.63% capital ratio of FHA’s forward loan book is below the mandated minimum of 2%, suggesting there should not be a premium cut this year.

This year is a good time for the FHA to remove HECMs from the MMI fund, Goodman suggests, since interest rates in November 2015 are largely unchanged from November 2014. Additionally, this November’s rates will determine the discount rate used to calculate the 2016 MMI fund’s net worth.

But as future rates rise, Goodman notes that the HECM book of business could “cast a pall over the MMI fund.”

“It’s time to stop publishing a distorted picture of the value of the MMI fund,” she writes. “We should separately assess the forward and reverse mortgage businesses when determining FHA’s financial status. The coming year is the right time to make this change.”