Home values only saw a slight uptick in September, but homeowner perceptions still overvalued their properties compared to appraiser opinions, according to a recent analysis from Quicken Loans.

Appraiser opinions of home values in September were 2% lower than homeowner’s views, according to the national Home Price Perception Index (HPPI) from Quicken Loans, the parent company of reverse mortgage lender One Reverse Mortgage.

While the gap between perceptions and opinions narrowed in September compared to the previous month, the findings marked the eighth consecutive month homeowner estimates outpaced appraiser opinions.

Compared to last year, the national average of home values have increased 3.11%. However, the pace of the increase in September was slightly lower than in August, when the HVI showed 3.24% annual growth.

Regionally, the West posted the largest gains with 0.72% monthly and 6.03% annual increases, whereas the Northeast and Midwest regions posted both monthly and annual home value losses.

It’s not a coincidence the West is showing the greatest home value increases, with nearly all of the western cities measured in the HPPI showing appraiser opinions higher than homeowner estimates, says Quicken Loans Chief Economist Bob Walters.

“Homeowners are hearing national reports of slower home value increases, or even drops in value, when that isn’t the case everywhere,” Walters said in a written statement. “Appraisals are telling a different story in many western cities buy homeowners may not realize home values are still making such strides.” (Click chart below to enlarge image). 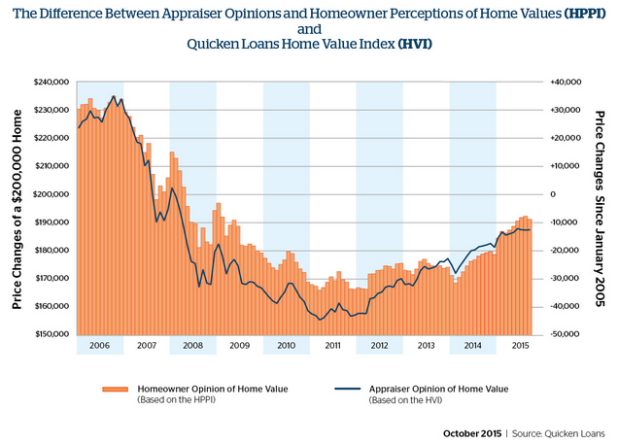 Although home values increased in April, the gain was not enough to cancel out March’s decline, said Walters.

“Homeowners that are still underwater are looking for large increases, but those increases can in fact price homebuyers out of the market,” he said. “Home affordability could become a worry if home value increases get too far ahead of the modest pace of wage increases, which are sitting at about 2 percent annually.”

Headquartered in Detroit, Quicken Loans is the nation’s second largest retail home mortgage lender. The company closed $140 billion of mortgage volume across all 50 states in 2013-2014.