Even though reverse mortgage underwriting now bears some similarities to traditional mortgage lending as a result of the Financial Assessment, that doesn’t necessarily mean forward mortgage originators are better equipped to adapt to the new rules.

The results of a recent RMD poll indicate that forward originators do not have a competitive advantage in the reverse mortgage market now that the Financial Assessment is in place, with 54% of the total votes expressing this view and 46% voting in favor of the opposite.

While originators agree that having forward lending experience does help from an underwriting perspective, they cite that reverse mortgage product abides by different standards with an emphasis on residual income rather than credit scores or debt-to-income ratios, criteria required in traditional mortgage lending.

Having forward experience is good because the expectation is right, but it could be an issue if originators don’t distinguish between the respective rules and standards of each loan, suggests Harlan Accola, certified reverse mortgage professional and reverse mortgage planner with Fairway Independent Mortgage in Marshfield, Wis., which offers both forward and reverse mortgages. 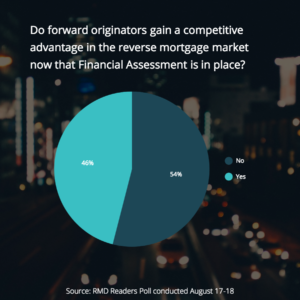 “Forward originators have more of an understanding that it’s a problem if you have a 90-day ‘late,’ so it helps from that perspective that there’s a good chance a borrower won’t pay their taxes,” Accola says. “But the bad thing is, they try to go back to credit scores or ratios because they are used to doing that.”

On the opposing side of the debate, experience with credit analysis was one of the biggest factors driving sentiments that forward originators have somewhat of an advantage under the Financial Assessment.

“Forward originators have a slight advantage in that they have worked within credit analysis on a daily basis as part of pre-approving buyers, whereas the reverse mortgage-only originator never viewed credit for qualification until after application unless judgement was evident,” says Brian Cook, a Washington-based loan officer at Primary Residential Mortgage.

In the days preceding the advent of the Financial Assessment, speculation abounded that originators could leverage their forward expertise in weathering the new underwriting requirements that would arrive as a result of the new rule. While that may be true now as the industry moves further into FA territory, even with the program changes the ball is still in the court of reverse mortgage originators.