Whether it was the sad slow demise of Financial Freedom or the shocking exits of Bank of American and Wells Fargo, the last year has been a rough one on the reverse mortgage industry.

While 2011 was about the loss of industry-defining reverse mortgage brands, the next 12 months will be about building the next generation of lenders.

For the first time in years, companies have a real opportunity to build the largest reverse mortgage lender in the nation. Prior to Wells and Bank of America’s exit, there was no realistic chance anyone could overtake either company in a year. But now, things are different.

Major brands like MetLife and Genworth remain, but less well known companies like One Reverse Mortgage, American Advisors Group, Urban Financial Group and Security One Lending have all picked up significant market share the last few months. Over the last few months, MetLife seems to have solidified its position as the #1 lender after the exits, will any of them be able to overthrow them?

How Things Will Play Out

While all of these companies race to pick up where Wells and BofA left off, they will be doing it as the Federal Housing Administration makes new changes to its reverse mortgage program.
I’ve said it once and I’ll say it again: 2012 is the year the HECM program grows up. An industry-wide financial assessment is coming, but exactly what it will look like isn’t clear.

MetLife struck first late last year when it released its guidelines, but others seem to waiting on Department of Housing and Urban Development to move first. Let’s be honest, the people at HUD have a difficult job ahead. How do they establish guidelines that don’t rule out a large percentage of the population the program was meant to serve?

Not follow in MetLife’s footsteps, according to some in the industry.

Most would like to see HUD take a common sense approach that looks at past credit history to determine whether a borrower must undergo a full financial underwrite. If there are an estimated 10% of HECM borrowers in default from failure to pay taxes and insurance, is it a reasonable thing to exclude 20-30% of borrowers from obtaining a reverse mortgage?

Some don’t think so.

Who Will Come Out on Top?

Looking at the endorsement reports from the last few months, it looks as though MetLife is ready to take the top spot once occupied by Wells Fargo according to the latest report from Reverse Fortunes. 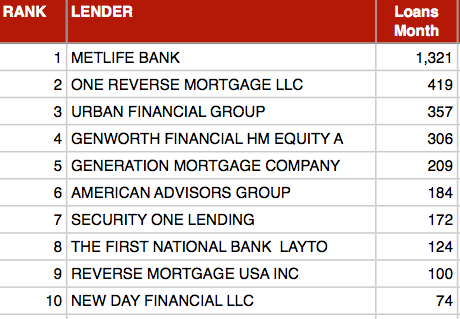 But with its financial assessment, MetLife’s monthly volume is going to fall, despite what their regional managers may claim. As a result, looking at the top 10 lenders at the end of December 2011, it’s open season for a new No. 1

Let’s not forget about New York Life’s entrance into the reverse mortgage space, or J.G. Wentworth. Both are big companies that have publicly—or not so publicly—announced they’re entering the space. However, J.G. Wentworth has been pretty silent ever since we broke the news last year.

But no matter what type of lender, the reality is, there has never been a better time for companies to solidify their positions as the next “Wells Fargo” of the reverse mortgage business.

As the old saying goes… “The King is Dead (Wells Fargo), Long Live the King”… who exactly will sit atop the throne at the end of 2012, we will have to wait and see.