Only a few months ago, an executive from the top reverse mortgage lender called me and said it felt as though we were living through Andrew Ross Sorkin’s “Too Big to Fail.”

Much like the movie, many any of the institutions that helped build the industry were disappearing overnight. Obviously on a smaller scale, but nonetheless just as dramatic for many of us who have built businesses on top of this industry as the largest reverse mortgage lenders exited one after the other.

I always tell people: “We’ve made it this far… we’ll be fine”, but for the first time I actually started to see evidence things are turning for the better during the National Reverse Mortgage Lenders conference in October.

During the event I noticed a few things. First, if there was an overarching theme for the conference, it centered around tax and insurance defaults and the steps needed to limit the number of future occurrences. No one claimed to have the perfect answer, but the industry was united in its effort by voting unanimously to approve a set of underwriting guidelines to address the situation. Whether you think the guidelines are acceptable doesn’t really matter—unless you’re a Ginnie Mae issuer.

Without this group of lenders that sells reverse mortgages, there wouldn’t be a secondary market and there wouldn’t be an industry. The Ginnie Mae issuers are the only lenders with real “skin in the game.” Why those who have left the industry are still involved in making decisions about the future of our business at the board level is beyond me.

MetLife was the first to release its guidelines, and many in the industry feel it might have gone a little too far. Others are currently in the process of releasing their own versions, but meanwhile, everyone is waiting for the Department of Housing and Urban Development to come out with an official rule for the industry to follow.

“It requires public notice and rule-making, which is a lengthy process,” we were told by just about every government official who spoke on the topic during the conference.

Karin Hill, director at HUD’s Office of Single Family Program Development attended the meeting with NRMLA board members prior to its vote on the guidelines, which seems a likely sign that HUD is on board with the industry’s decision. I can’t imagine NRMLA moving forward if HUD wasn’t in support of the direction.

Aside from making progress on steps needed to limit the number of taxes and insurance defaults, the conference included a few new faces—a nice surprise to an industry that saw Bank of America and Wells Fargo exit only a few months ago. While I won’t name names, I will say that the new companies are big players in different spaces, and let’s just say that MetLife and Genworth won’t likely be the only major insurance providers to offer reverse mortgages in 2012.

I’m told other deals are ready to close as well, but for fear of screwing any of them up, I’ll leave it at that. It’s a bit strange, but the big bank exits seem to be attracting large players who may have shied away from the industry, considering the major brands that were already involved in the space. That’s not to say these deals couldn’t fall apart, but for now things are looking better than they did six months ago.

If there was word I’d use to describe the NRMLA conference it would be Progress.

While I wasn’t sitting in on the NRMLA board meeting discussing the financial assessment, I bet it looked a lot like this scene in Too Big to Fail. Everyone coming together to address the challenges facing the industry and doing it in a united front. 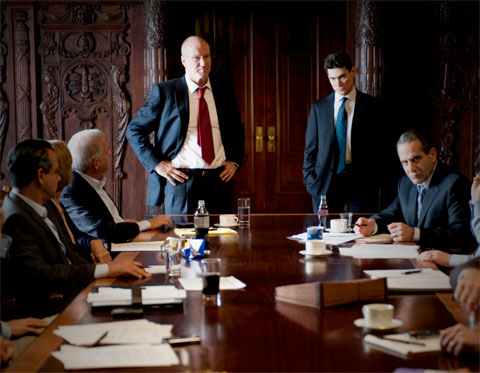 Everyone might not like the outcome of the financial assessment, but its something that needs to be done and the industry has shown it’s behind the decision. It may not be perfect, but it’s progress one step closer to finding the solution.

So while our industry might not be too big to fail, it’s too important to disappear. There is a debate going on in Washington, D.C., about the future of retirement in this country and while reverse mortgages might not be the answer, they’re without a doubt… part of the solution.