Thus far, the trend line for reverse mortgage volume in 2016 has been mostly marked by consecutive months of declining endorsements. As monthly volume has struggled to reach new heights this year, it’s only fitting that Home Equity Conversion Mortgage (HECM) endorsements continue to remain lower than year-ago levels.

On the roller coaster ride that is reverse mortgage volume this year, the trajectory of the first few months began with a brief climb from January to February, before arcing into a prolonged descent through May, according to industry data tracked by Reverse Market Insight (RMI).

Year-to-date (YTD) through April 2016, HECM endorsements total 17,232 units, a decrease of 8.2% from the comparable period last year, when endorsements totaled 18,778 units, as indicated by the most recent HECM Trends report from RMI. 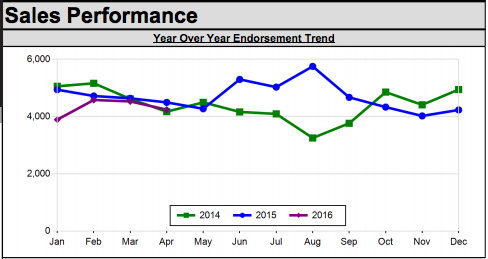 Despite the fact that HECM endorsements are more than 8% lower through April than where they were last year, there were several major metros that are seeing substantial volume increases.

Denver, which ranks as the eighth-largest city in terms of unit volume with 98 loans YTD through April 2016, reported an increase of 32.4% from its year-ago endorsement total—the highest growth among the top-10 largest cities for volume.

While seven of the top-10 volume producing cities experienced declines compared to last year’s numbers, Houston and San Diego grew 12.4% and 7.1%, with 145 and 136 units, respectively.

See where other markets stacked up through April 2016.

Reverse Mortgage Refinances Remain Near 50% of Volume in August

Reverse Mortgage Lender: We Need to Retire the Word ‘Senior’